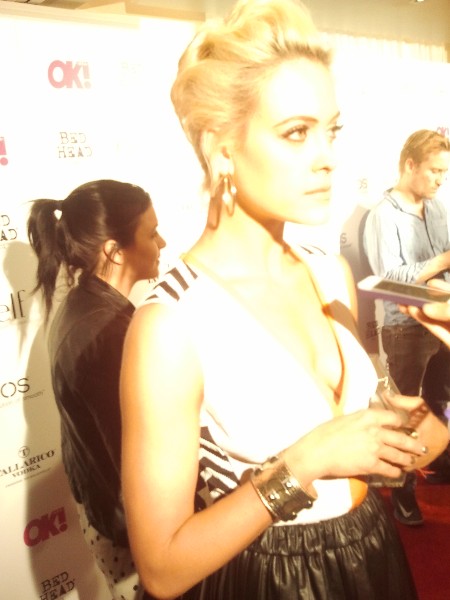 Peta Murgatroyd made an appearance at the OK! Magazine ‘So Sexy’ Event hosted by Brandi Glanville. CDL has the exclusive details here, but one of the more interesting interview tidbits we got was from Dancing With the Stars’ Peta Murgatroyd. Yes, the same Peta that has been embroiled in rumors all season that she’s been hooking up with partner Sean Lowe.

Now, the public front that Sean puts on is that he’s a good little boy who is madly in love with fiancé Catherine Giudici, and that he’s waiting for marriage to have sex. However, the reports that we hear are in massive contradiction to that, so we were interested in hearing what Peta had to say about their relationship.

She told CDL, “Everyone has to act on the dance floor. Sean knows that when he goes out there Monday night he can’t hold back. We are just like brother and sister. It’s so weird people are saying we are hooking up and I’m breaking up their engagement. It’s ludicrous. It’s so funny.” Right, so the smoldering stares and chemistry between them is just ‘acting’. Sure. For good measure, she also adds, “Catherine is very lucky and he’s a lucky guy to be with her.”

Well, she’s kind of obligated to add that last bit, right? So what does this mean for Catherine? Well, there’s no question that she’s already feeling insecure about all the rumors. She either trusts him completely or she’s already been keeping track of his whereabouts. And we’re going with the latter, considering that she’s turned up at almost every DWTS rehearsal and performance. Somebody seems to know that not everything on the dance floor might be ‘acting’.