Everybody Hates Pippa Middleton But Feels Kate Middleton Is Awesome – Justified or Harsh? 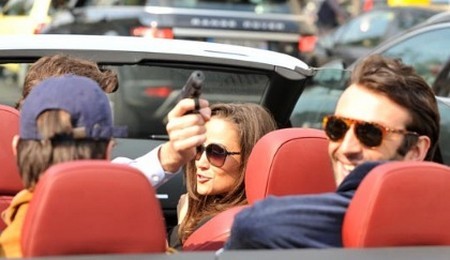 Everybody hates Pippa Middleton! That’s basically what the new report from the New York Times is saying. The Times doesn’t usually go after such major figures so blatantly, so they must have gotten permission from some high-up royal sources on this one. Scandalous!

The report goes in-depth at exploring how Pippa was the belle of the ball during Kate Middleton’s wedding day to Prince William, when nobody could stop talking about her dress or ass. However, two years later, everybody hates her. Well, hate is a strong word, but several prominent UK journalists go on the record stating that ‘people here just don’t like her.’

Fair enough. Since Pippa’s home entertainment book sold very poorly last year, she’s since landed a job at Vanity Fair as well as landing a ‘Friday Feasts’ column at a major British magazine – which people apparently don’t like. According to these sources, “She is not a cook, not a writer and has not really done anything but get this all off the back of her sister. Generally, there is a feeling that she is simply capitalizing off the situation.” An editor for the Sunday express adds, “There is some pretty sneering commentary over here that she has been cashing in on her sister.” But she also adds, “She may have seemed like a shrinking violet around the time of the wedding, but she is not. She has to make a living and this is her found fame.”

Obviously, the editor of Vanity Fair denied the rumors that they weren’t happy with Pippa, saying, “We’re delighted to have Pippa. She’s a keen observer of classic British pastimes.” Well, what else is he going to say? Oops, we made a big mistake in hiring the sister-in-law to the future King of England, let’s fire her? No, he’s not.

Of course some of Pippa’s antics could have adversely affected public opinion.  Her drunken gun-waving joy ride through Paris wasn’t exactly welcomed by the Palace and painted Pippa as a spoiled dilettante, which of course she is.  Then there is her peevish reaction to being satirized for her inane home entertainment book, Celebrate: A Year of Festivities for Families and Friends.   The offending lampoon in question is the book, When One is Expecting: A Posh Person’s Guide to Pregnancy and Parenting. Really what can Pippa expect?  Nobody likes to see the blatant nepotism of which Pippa is the greedy beneficiary.

What do you guys think about this story? Do you like Pippa or do you also feel like she’s been capitalizing on her sister’s position and fame? Let us know your thoughts in the comments.