Prince Harry Going Back To War, Will Cressida Bonas Wait This Time? 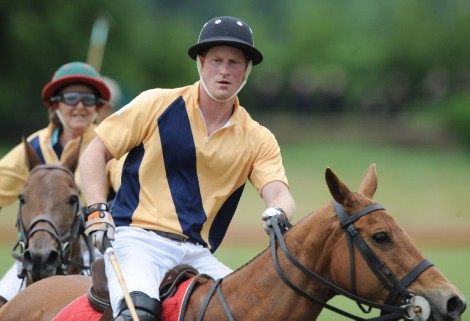 I know. I’m sorry. This isn’t a story about Kate Middleton or the royal baby. That late, lazy baby may be pushing Prince Harry down the royal food chain (which I’m positive he loves) but I won’t allow it to push him out of the gossip. He’s just too damn good for it.

Somehow the British press found out that Prince William’s younger brother’s unit may be going back to war early next year in the Helmand province. Prince Harry is reportedly “eager to return” with his men. This would make it his third mini tour of duty since he first went to Afghanistan in 2008. Neither Clarence House nor the Ministry of Defense are commenting.

Damn. I don’t want to lose Harry for four months again. Do you remember when he was gone? Christ it was boring! Luckily, Kate and Will knew we were dying and spruced things up with the hyperemesis gravidarum story but still… it was nothing compared to Las Vegas Ginger Booby Gate.

And what about Poor Cressida Bonas? Prince Harry is supposed to be obsessed with her at the moment. I keep hearing that they may actually be shacking up. I suppose if she stood by him during the Las Vegas scandal, his second tour of Afghanistan AND that big society wedding where ex Chelsy Davy was the maid of honor then they can get through anything. This girl has lasted much longer than I thought she would which means she’s willing to play the game. What’s another four months when there’s a crown in the balance? But are we thinking too far ahead? We’ve got ten months until Harry potentially leaves again. Who knows if he and Cress will even be together? But if they are… would he leave her with a ring? See? I told you. Baby Wales has nothing on Uncle Harry!