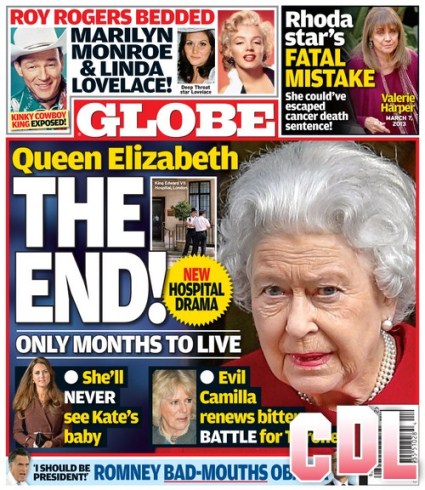 GLOBE announces on this week’s cover the end is near for Britain’s longest reigning monarch – Queen Elizabeth II has only months to live.  Her recent hospitalization resulted in the cancellation of  a host of official engagements and raised concerns that the Queen was seriously ill.  The official palace announcement was that Elizabeth’s hospitalization was due to “gastroenteritis,” or “stomach flu” as it’s commonly named.

The Queen was released from hospital but just yesterday announced another bunch of appearance cancellations.  This calls into question the true state of Queen Elizabeth’s health.  GLOBE’s inside sources are reporting that in fact the Queen is dying and is unlikely to live to see the great-grandchild she so encouraged Kate Middleton and Prince William to conceive.

As GLOBE reported months ago the Queen promised that if she could live to see William’s heir then she would take the necessary steps to allow him to bypass hapless Prince Charles and ascend the throne in place of his father.  Naturally this caused the adulterers, Charles and his evil wife Camilla Parker-Bowles, to lose their minds and resort to every dirty trick imaginable to sully the Queen’s impression of Will and Kate. Now that Elizabeth might not be alive to see Kate’s baby, and then make William King, Camilla has thrown her scheming into high gear as she renews her battle for the throne.

Roy Rogers, that good old singing cowboy, had steamy affairs with Marilyn Monroe and Linda Lovelace!  Globe reveals all the hot details of these Hollywood hookups in this week’s March 25th print edition.  Is there any celeb who didn’t manage to sleep with Marilyn?

GLOBE reveals on the cover that Valerie Harper made a fatal mistake, that with different choices she could could have avoided her cancer death sentence.

GLOBE lines up the stories this week that I want to read! With Queen Elizabeth deathly ill the palace intrigue is heating up and is already at fever pitch.  Only GLOBE has the inside sources, the courage and the integrity to report what is really happening in Buckingham Palace as an era ends.  The bitter battle for power between the new generation of jet-setting Kate and Will and the stodgy old traditionalist gild of Camilla and Charles promises to throw the monarchy into confusion and contention.  GLOBE explains it all to us in the March 25 print edition.  Once I get my GLOBE and sit down in my favorite chair I can just sit back and let the world’s worries slip off my shoulders.  I know that hours of reading pleasure await me!