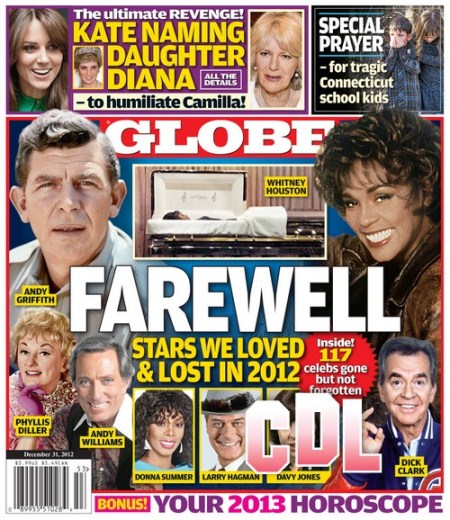 This week’s GLOBE reveals that pregnant Kate Middleton is planning the ultimate revenge on her bitter enemy, Camilla Parker-Bowles.  Camilla cheated with Prince Charles on his wife, Princess Diana, for years resulting in a royal scandal that shook the very foundations of the British Monarchy.  It was all poor Queen Elizabeth could do to contain the fallout of this blatant adultery and to this day Prince Charles’ reputation has never recovered.   Prince William and Prince Harry saw their mother struggle to maintain some sense of balance in her life and neither prince has ever forgiven cruel Camilla for ruining their childhood.

But now Kate has the means to deal a crushing blow to William’s wicked stepmother.  GLOBE has learned through exclusive palace sources that the Duchess of Cambridge will name her daughter Diana with Prince William 100% in support of the decision.  So Kate’s child will be a constant reminder to Camilla of the woman who was her arch rival, the lovely Princess Diana.  GLOBE will have all details of the furor this name choice is causing amongst the royals in the December 31st print edition on sale now!

GLOBE acknowledges the tragic horror of the Sandy Hook elementary school shootings with a special prayer in the print edition.

This special last edition of 2012 contains a detailed horoscope evaluation for the year 2013 – I can’t wait to read what’s in store for those of us born under the sign of Gemini.  Do you believe in astrology?

GLOBE bids a final farewell to those stars we’ve loved and lost in 2012, and sadly there have been too many.  Andy Griffith, Whitney Houston, Phyllis Diller and Andy Williams are just 4 of the 117 that have gone but are not forgotten in 2012.

GLOBE will no doubt reveal all of the palace intrigue that has been rocking the royal boat since Kate’s pregnancy was announced.  GLOBE has its ear to the wall in all the right places – and palaces!  When I sit down to relax with my copy of GLOBE it is as though I am right in the middle of all the hottest news and celebrity action.  Nothing beats my GLOBE reading to ensure that I get all the important information along with pure pleasure.