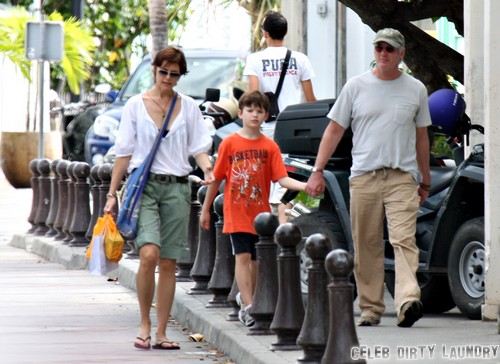 I have to admit, I’ve never understood the appeal of Carey Lowell. She is a former model and as an actress best known for her work as an ADA during Law & Order’s early days. Since retiring from all of that Carey is best known for her marriage to mega-star, Richard Gere. The two began dating in 1995, married in 2002 and now it looks like a divorce is imminent.

According to People Magazine the couple has been living very separate lives for quite some time now in two different properties in New York state. They share custody of a 13-year old son named Homer but from the sounds of it, they had little in common from the get-go. Gere is an established Buddhist that when not working loves his privacy and solitude. Meanwhile Lowell is still quite the social butterfly and loves to entertain and spend time with droves of people.

That right there is the kind of lifestyle difference that could cause some issues because it means that Gere and Lowell naturally went in opposite directions more often than not. This split isn’t really coming as too much of a surprise either as he was spotted out on several occasions recently chatting up various women. When a man openly carries himself like he is single then that usually means that one way or another he is certainly on his way to becoming single for real! I guess the question here is whether or not Gere’s flirty behavior was a contributing factor towards this divorce. There were rumors that Gere was hooking up with Diane Lane after her split with Josh Brolin earlier this year.

This really seems to be the season for long-time Hollywood couples to split doesn’t it? Are you surprised to hear about these two going their separate ways? Tell us your thoughts in the comments below.