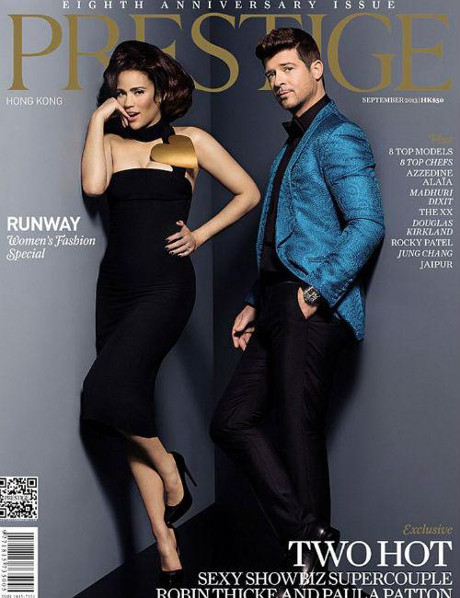 The day after the picture went viral, they were conveniently photographed vacationing on a beach with their children, giving off the vibe of a perfect family. Now, they cover the latest issue of Prestige Hong Kong, discussing how lovely and amazing their marriage is.

Paula says, “We’re best friends. We laugh a lot. But that’s our down time. We do the things you’re supposed to do, like work out – blah, blah, blah, boring, boring.”

Robin also tries appealing to the mom demographic by opening up about his son and saying, “You can have all the success in the world. But if your child is not happy and content, none of it matters. He doesn’t have to be a billionaire, he doesn’t have to be smart. But he has to be kind and compassionate to others. His heart, I’m in charge of that, so if I leave him alone and I care more about myself, then it’s my fault.”

Well, that’s nice. I don’t not believe that they’re friends, and whether he was cheating on her or not, Paula seems to be fully aware of the parameters of their relationship. But this is obvious image cleanup, and it’s already done a lot to quiet the speculation.

What do you guys think of Paula and Robin covering the magazine? Coincidence, or was this specifically done to take the attention away from the scandal? Let us know your thoughts in the comments.