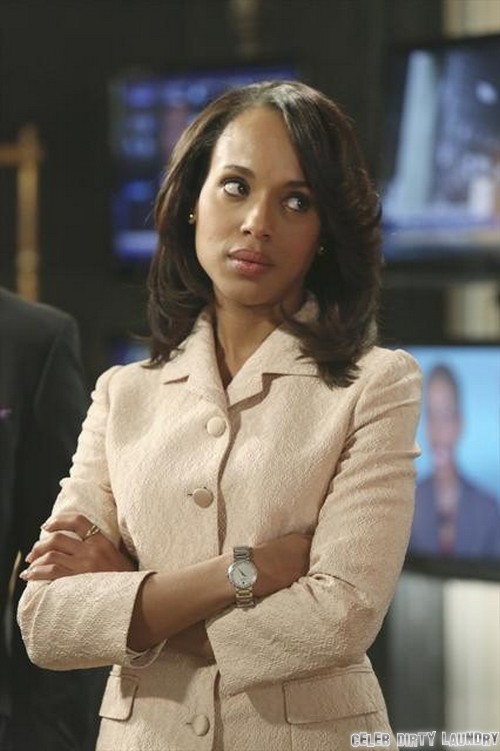 SCANDAL returns to ABC tonight with a new episode called, “Snake in the Garden.” On tonight’s show Karma’s a bitch.  Gregg Henry is back guest starring as Hollis Doyle.   Did you watch the last episode? We did and you can catch up HERE!

On the last episode Olivia found herself in the middle of a media storm, but this time she’s on the opposing side of the oval office when Fitz’s picked for Supreme Court Justice was caught in a torrid affair with Liv’s new client, high-powered CEO Sarah Stanner (Lisa Edelstein). Meanwhile, Olivia and Jake continued their flirtatious relationship, while Huck took Quinn under his wing and Harrison and Abby triws to figure out where they stand with their friendship. Back in the White House, Cyrus and Mellie continued to fight for Fitz’s attention, but someone already had it.

On tonight’s show the team find themselves working for the devil when Hollis Doyle’s daughter is kidnapped and held for ransom. Meanwhile, David is still in danger and is forced to seek shelter at Pope & Associates; Olivia and Jake take their flirtatious relationship to the next level even as the President continues to rely on Jake for intel; in the White House, Cyrus will stop at nothing to get back into the President’s good graces; and Mellie’s claws come out when she tells Fitz he needs to make some changes.

Tonight’s episode looks like it is going to be a great episode and you won’t want to miss it, so be sure to tune in for our live coverage of ABC’s “Scandal” Season 2 episode 17 at 10 PM EST! While you wait for the recap, check out s sneak peek video and some pics from tonight’s episode below!

Tonight’s episode begins with Cyrus hiring a private eye to dig up dirt on Jake who seems to be gunning for his job. Osbourne shows up at Olivia’s apartment to threaten her. He demands to know who hired her and she isn’t budging. Instead she threatens him back and he leaves warning her that he’ll be back. Meanwhile David is camped out on a couch at Pope & Associates offices because he came home to a ransacked apartment and clearly is in danger.

Olivia’s client for this week is Hollis who has 5 ex wives and 8 children. His daughter Mayabelle sent him a ransom video that he sat on for 12 hours before sharing with anyone. The girl was a dealer and junkie so he believes it’s an act for money.  Mellie corners Cy and insists that Fitz is cheating on him with a military guy- Jake.  He informs her that Fitz’s schedule has their older kids coming from boarding school in spite of Mellie thinking they should stay put.

Olivia and co. are seated around the table trying to figure out where Mayabelle could be stashed and Hollis is eating. A package is delivered and his 4th ex wife opens it to discover an ear inside. Liv gets on the phone to try and negotiate. Hollis insists that none of this is real. He refuses to pay the ransom within 24 hours. Harrison asks why the hell they are helping Hollis Doyle and Liv says it’s because even the devil loves his kid.

Jake lets himself into Liv’s home and changes all of the tapes so that he can continue spying on her. He then discovers her notepad which says Osbourne is the Mole. He brings that information to Fitz so that they can take care of it. Meanwhile Liv gets a photo of Mayabelle who is obviously missing an ear. Now Hollis is screaming to pay the ransom. They wire ten million and agree to drop off another ten million. They have twenty minutes.

Cy goes in to appeal to Fitz to get a real conversation out of him and it works. Fitz tells him to sit and clues him in to the fact that they are raiding Osbournes home because he is the mole.

Liv goes to the drop off spot and convinces Mayabelle to run to her after Huck drops the money.

Jake is supposed to go out with Liv but she needs to cancel. She tells him face to face that she isn’t over the last guy. He responds by telling her that maybe he is supposed to be her do-over or next chance for love. He insists she close her eyes and when she does he kisses her and then leaves.  Huck is examining Mayabelle’s ear and realizes that the way it is cut is jagged, she did it herself and had to saw it. Instead of getting in a cab to drive her to the airport he drives her to Olivia’s. She says she needed the money and is unapologetic about it. Hollis tells her to take the money or choose family. She chooses the money and leaves.

Osbourne storms into Cyrus’ office freaking out because men are going through his home and office. He swears he is not the mole. Meanwhile elsewhere in the White House Fitz and Mellie are at war because she canceled their trip. After he finishes screaming she tells him that the kids begged not to have to come. She tells him he reeks of scotch nonstop and the kids fear him. She tells her that she may not be a typical mom but they still recognize her as mom. Her kids don’t know or like him because he is now like his father.

Tonight’s episode ends with Osbourne dead but it was revealed that he wasn’t the mole!