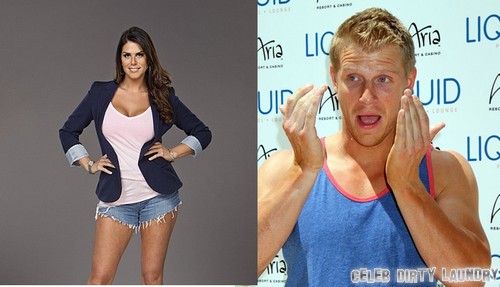 Amanda Zuckerman has being heating up the Big Brother 15 house and being a huge Big Brother fan, I wish it was with her excellent game play, but rather, it is with her mouth that spews constant slurs to bully the other house guests.

After entering the Big Brother house, Amanda quickly forged a showmance with pizza delivery boy, McCrae Olson and has proven to be insanely jealous of any girl that even sits beside her man. She is such a control freak that she even orchestrated a fake wedding in the house, sealing her hold on poor McCrae who sadly has the spine of a jellyfish.

On August 28th, Amanda told her housemates that she auditioned for The Bachelor season 17 with Sean Lowe, but get this…. he rejected her at the final stage! Apparently, Amanda’s psycho personality is a perfect fit for CBS, but ABC and Sean Lowe were having nothing to do with it.

Last week, Amanda went on a tirade throughout the Big Brother house that she herself called “bullying”, when she attacked Elissa. Amanda has even gone so far as saying that she wanted to, “kill Elissa in her sleep”. Can you imagine what she would have done to the girls in the The Bachelor, all of them fighting over one man?

If Amanda had been on The Bachelor, I have no doubt there would have been casualties and ABC would have have had to bleep 90% of the show because of the filthy garbage that spews out of Amanda’s mouth. Poor Sean would have been permanently scared as he cares deeply about religion, being a member of The Fellowship of Christian Athletes who is also involved in his church’s youth group.

Us Weekly called Sean “the Virgin Bachelor” because after college he admittedly swore off sex. Amanda on the hand exploits her sexuality to the point that her own father, Robert Zuckerman, tweeted that “she needs to tone down her sexuality“. Honestly, she would have eaten this poor Bachelor alive had he not had the insight to reject her.

Sean Lowe’s is presently engaged to Catherine Giudice and a televised wedding is scheduled for 2014.