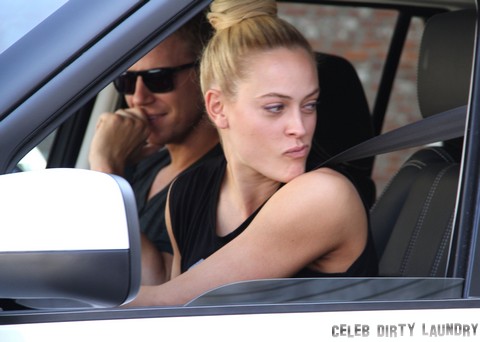 Sean Lowe is not having a good day, is he? After Sean got the news that he was eliminated from Dancing With the Stars, he got an even more crushing blow in the form of his fiancee Catherine Giudici telling him to f**k off. According to reports, Catherine’s been sick of Sean’s flirting with DWTS partner Peta Murgatroyd for some time now. Even if their relationship is all for show, she can’t be having her supposed fiancé flirting it up with some hot dancer, can she?

So just like that, Sean loses all the money he could have earned from ABC for the wedding. Can you blame him though? Sean has more chemistry with Peta than he’s ever had with Catherine, so let the poor sex-starved guy have some fun in his life. As long as he doesn’t mind that it leads to his breakup with Catherine. Of course, he’ll still make plenty of money with tabloid interviews and televised interviews about how ‘difficult’ this ‘breakup’ has been for him.

Maybe he’ll even hook up with Peta for real – wouldn’t that make the tabloids go wild? A love triangle featuring the Bachelor, his chosen, and his hot dancing partner. I mean, they’ve already been on a roll with just rumors, so this would just be feeding the frenzy.

Then again, no one [except maybe ABC] forced Sean to flirt with Peta and ignore Catherine. I doubt there was anything about that in their Bachelor contract, which means Catherine will come out as the winner in this little scenario.

What do you guys think? Are you sad that Catherine dumped Sean? Do you wish that Sean would hook up with Peta? Or do you wish that these reality famewhores would just go live on an island somewhere and leave us all alone.