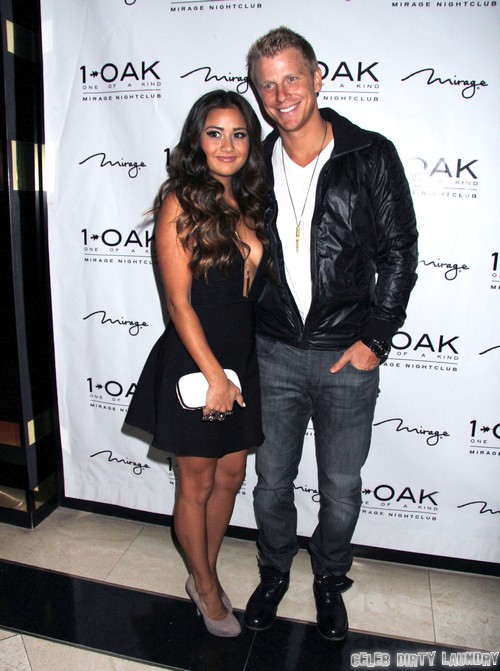 Were you guys shocked yesterday when former star of ABC’s The Bachelor Sean Lowe announced with his fiance, Catherine Giudici that a wedding date has actually been set? After the duo announced their engagement last March what followed were numerous stories of Sean being a famewhore while Catherine sat alone in her shiny new L.A. Apartment waiting for him to decide to pay her some attention. After Sean wrapped up his stint on Dancing With the Stars he decided to actually spend some time with Catherine and guess what? They seem to really love each other or else just want the big payday that getting hitched on national television will bring! Either way, ABC will broadcast their wedding on January 26, 2014 and no one is more stunned then Sean’s family.

If you remember, he hails from super strict Christian roots, the kind that encouraged him to become a prayer warrior and abstain from all sorts of things, including sex. Catherine isn’t exactly up to their standards for girlfriend material, let alone be considered as part of the family. She is an edgy girl that has swayed Sean from some of his values and for that reason they think the wedding is a bad idea. So bad that when Catherine threw an engagement party back home in Seattle none of Sean’s family or friends showed up! The extravagant affair ended up being noticeably one-sided according to Radar Online.

How do you think this will ultimately shake out? Will Sean and Catherine marry in a few months or will his family talk sense into him first? Tell us your thoughts in the comments below!