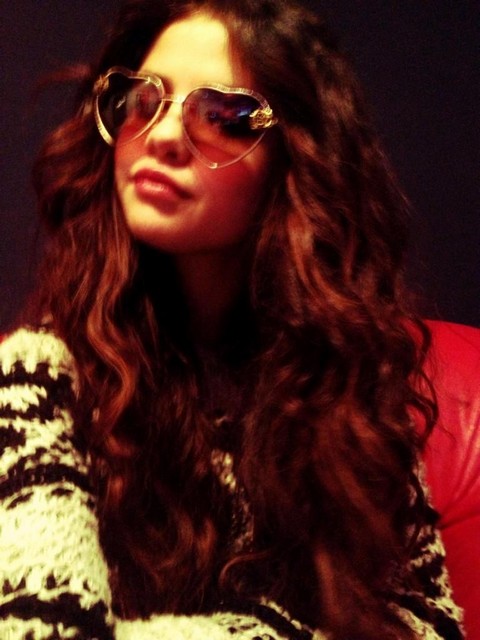 A few weeks after splitting from Justin Bieber (for good I hope), Selena Gomez seems to be moving on just fine. She spent the first few days hiding out but after that we have seen Selena looking very glam for some red carpet appearances and appearing quite happy with friends at other times. Clearly this girl isn’t sitting home crying over a teenage boy! She has also be-bopped into the studio to vent her heart break and anger a’ la Taylor Swift. That’s right, supposedly Selena’s next album will be loaded with inside details of her relationship with Justin. He embarrassed her publicly and it looks as though Selena is about to return the favor.

Yesterday Selena posted a photo of herself on Twitter with wavy hair and heart shaped sunglasses. She herself said she was channeling Penny Lane in the shot and if you remember the movie Almost Famous then you’ll know that Penny was like, the biggest groupie ever.  That leads us to wonder if the newly-single starlet is emulating Penny in more direct ways.

Selena was linked to Niall Horan of One Direction a few weeks back and at the time the two blew off speculation, mainly because Selena was still in a tangled mess with douche bag Justin and she wasn’t about to start anything new until she figured that mess out. Both Selena and Niall really like and respect each other and appear to be pretty tight. Could a hook up be in the works- or already happening?  While the press follows both of these stars, where there’s a will there’s always a way to sneak someone incognito into your hotel room. Perhaps Selena’s dalliance’s with Niall are what made her think of Penny Lane in the first place!

Could there be a Selena and Niall thing brewing? Tell us your thoughts in the comments below!