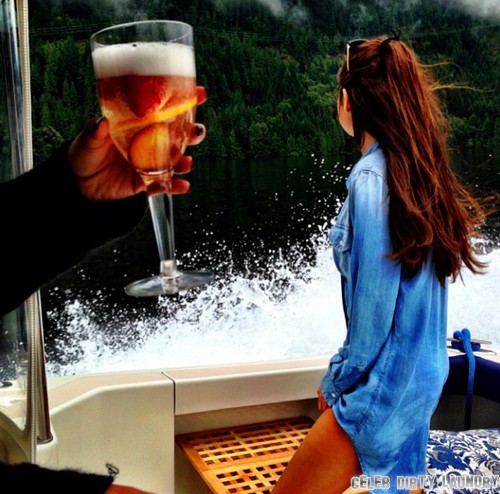 According to reports, Selena Gomez was spotted on a boat in Canada. So what is she doing there? Well, the wild conspiracy theorists claim that either she’s back with Justin Bieber and they’re visiting his family back in his home turf, or she’s trying to send him a message. If you are to believe these theories, then you would be believing that Selena would be willing to take Justin back, and that’s just something I have a hard time believing.

Don’t get me wrong, I totally buy that she’d hook up with him again, especially since she hasn’t had any trouble doing just that every once in a while during the past year. But she has stated pretty unequivocally that she and Justin are finished, and that’s pretty permanent. So why would she go back on that, especially since she has so many other, BETTER choices to choose from? Anyone would be better than Justin, including ex-boyfriend Nick Jonas, Harry Styles, even Ed Sheeran, who she was rumored to be dating for a hot minute.

So my version of Selena spending some quality time in Canada is that she’s taking a break, and it’s just a coincidence that she ended up in Canada. I’m sure she’s been there before with Justin, but it’s not like the entire country belongs to him. Plus, it’s such a peaceful and beautiful country that is also a hot tourist destination, and Selena could just be spending some downtime there.

What do you guys think about Selena being spotted on a boat in Canada? Blown out of proportion or is it related to the whole Justin Bieber situation? Are she and Justin back together, or are they still doing their hook-up every once in a while thing? Considering that Justin also seems to have moved on, I think even that will start to wane.