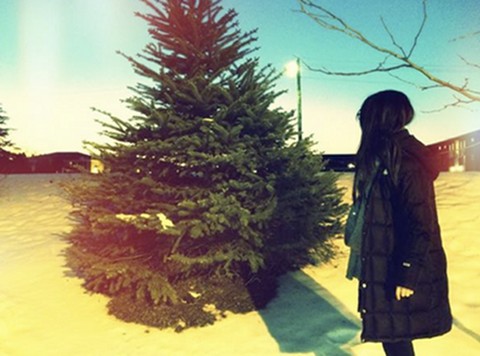 Despite her girl power attitude, we never expected Selena Gomez to have all the answers. She and now ex boyfriend Justin Bieber have been on the rocks since his illicit affair with Victoria’s Secret model Barbara Palvin, and on New Year’s Eve their relationship status went from “it’s complicated” to “definitely single.” Selena realized that, despite their mutual love for one another, they could never work. And so she shot down his desperate pleas for forgiveness and ditched him for good.

Since then, Justin has bee involved in several headline stories: a paparazzi was tragically hit by a car while chasing him, and then his unapologetic love for marijuana spread across the internet like . . . weed fire! (Get it? Wild fire? #badpun) In normal girlfriend mode, Selena would be comforting Justin and trying to help. In ex girlfriend mode, she’s having therapy sessions . . . with trees.

The ex Disney starlet posted a photo on her Twitter account. It shows her standing next to a lonely pine tree, captioned, “Thanks for listening, bet you understand.” I see two possible interpretations. First: Selena has actually gone crazy and now talks to trees. Not likely. Second? Selena is super famous and in the spotlight 24/7, and was enjoying some solitude. She has to be careful about what she says, and to whom she says it, lest it end up on our website! But one thing’s for certain: Selena has skeletons, and she needs to talk about them to move past her now dead relationship!

We’ve reported that she hasn’t been eating much since Justin’s affair hit headlines, and her weight loss, paired with this feeling of loneliness and isolation could be a very dangerous combination. Normally she’d turn to gal pal Taylor Swift, but I guess Selena doesn’t want to interrupt her intense, month long make out session with baby boyfriend Harry Styles. But if Selena doesn’t find someone trustworthy to talk to soon, she may end up alone talking to a plant! Do you think Selena has some baggage to sort out?