Selena Gomez Gets Undressed To Her Underwear On Live Television! 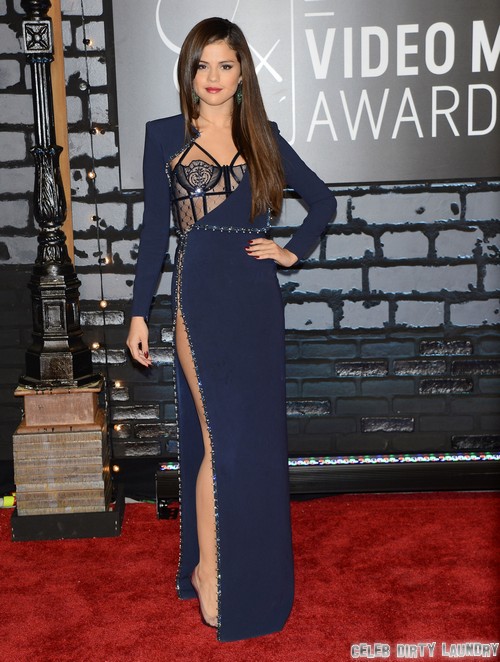 I felt so embarrassed for Miley Cyrus after her VMA performance, and apparently, I wasn’t in the minority. Many fans and viewers alike have spoken up, calling her performance over-the-top and ludicrous, but you know who doesn’t agree with that? Selena Gomez.

She gushed about Miley’s performance and according to US Weekly, stated, “Amazing. I thought it was awesome. I like Robin Thicke too, so I like that they [collaborated]. I thought that was good.”

Selena’s already tried to sex up her image in the past, so it wouldn’t be hard to believe that she sees Miley’s performance as something to aspire to. However, she does add that she’s going to take a break from music for a while, so instead of stripping on-stage like Miley, she’ll end up doing it in movies [a la Spring Breakers].

She explained, “I’m a woman so I change my mind all the time. One day I want to do acting and just that, and then other times I just want to do music and just that, so it changes. But this is my last record for a while. I’m going to tour it and then I’m going to just kind of get into acting for a really long period of time, hopefully.”

First of all, I hate how she attributes changing her mind to being a woman. Men can change their mind too, damit! Secondly, Selena’s trying desperately to reinvent herself and her image, and what better way than to follow in Miley’s footsteps? She clearly admired Miley’s performance, but I don’t think Selena will have the guts to do something like that in front of a live audience. Or maybe she will. But I don’t doubt that her next few movie roles will be a lot more ‘sexy’ than what we’re used to, barring [once again] Spring Breakers.