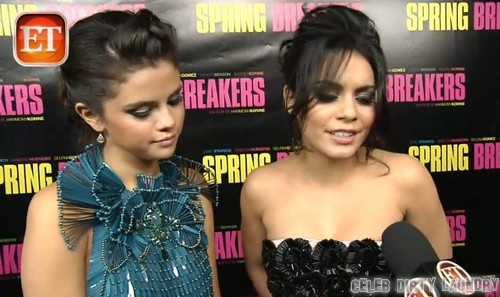 Former Disney teen queen Selena Gomez and High School Musical star Vanessa Hudgens both appear scantily clad in their new movie Spring Breakers. In fact, the girls are mostly in a bikini for the entire duration of the movie. And you would think that would bother them, but apparently that’s not the case!

Selena and Vanessa walked the red carpet for the premiere of the new flick wearing some pretty racy dresses. Nothing says “I’m an adult” like showing off some serious sideboob in a sexy dress!

When asked if they had ever taken a vacation on Spring Break, Vanessa and Selena said that they hadn’t. So basically, they’ve been living vicariously through the movie. Cute, right? Check out the video, below:

We’re guessing that men are basically looking forward to seeing this movie because of the gratuitous use of bikinis throughout. We already know that Selena has warned away her more younger fans from watching the movie due to its adult themes. Does any of this make you want to see the flick? Sound off with your thoughts in the comments below!