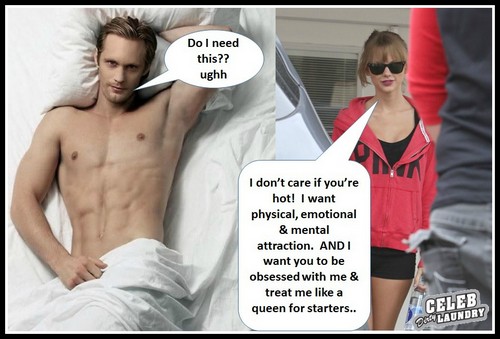 In one of the most ridiculous love triangles to ever be suggested by the tabloids, Taylor Swift and Katie Holmes are reportedly fighting over Alexander Skarsgard. This is what happens when you have three massive tabloid stars working on the same movie – the tabs will go crazy and try to come up with various make-believe scenarios.

In this particular situation, Star Magazine suggests that Katie and Taylor are ‘fighting‘ over Alex because even though Taylor has ‘her eye on Alex‘, she has some ‘major competition‘ from Katie. A ‘source’ explains, “Film insiders say that both women are vying to win over. Taylor is like a giddy schoolgirl around Alex, and Katie is also very into him.”

Can you ever imagine Alexander Skarsgard dating either Katie Holmes or Taylor Swift? Let’s logically try to pretend what that would entail. If Alex dated Taylor, he would dump her in 5 minutes after she sent him the first clingy text message. And he wouldn’t even get near dating Katie because if she expressed any interest, I have a feeling he would run the other way. Who wants to get on Tom Cruise‘s bad side [apart from Jamie Foxx]?

So the chances of Alex dating either of these woman are nil. However, I wouldn’t be surprised if they both had crushes on him. Taylor has crushes on every attractive guy she ever works with, so I can see her trying to subtly flirt with Alex, even if it’s just a one-way street. And with Katie, I think she probably forgot how to flirt after years of Scientology brainwashing, and she might just awkwardly stare at him from across the room. Ok, maybe I’m being too harsh. She has probably said one or two words to him.

What do you guys think? Do you think Alex would ever date Taylor or Katie? Let us know your thoughts in the comments.