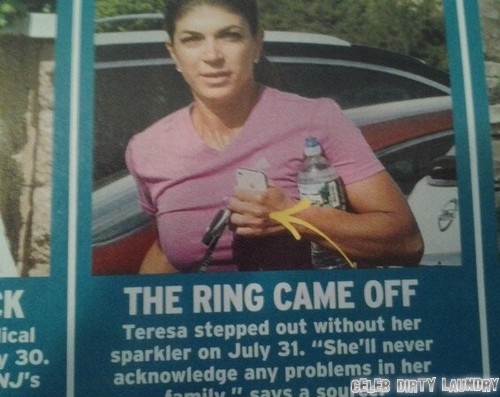 It looks like it is most definitely the beginning of the end for Teresa Giudice and Joe Giudice’s marriage and it’s about time! Fans of The Real Housewives of New Jersey have watched as Joe disrespected, insulted and cheated on his wife as she stood by trying to rationalize his bad behavior. It seems as though that 39-count indictment is finally the equivalent to rock bottom for Teresa.  On July 30th she was spotted out for the first time ever without her wedding ring.

According to the Aug. 19th print edition of In Touch Teresa has finally come to her long overdue senses and realizes that the only way that she has even a small chance of raising her four kids is if she testifies against Juicy Joe. Even then Teresa may not be able to walk away with a slap on the wrist. At this point she is praying to avoid prison time and instead end up on house arrest.

You have to remember Teresa is accused of forging W-2’s and her signature is on various fraudulent documents as well as Joe’s so while it’s great that she’s finally ready to cut ties with him, it’s still too late to escape joining in his downfall. She’s still in over her head when it comes to that illustrious indictment!

As far as court goes, separating herself from Joe as much as possible is the way to go and apparently she realized this from the start because the two of them have always had different attorneys. Do you think the marriage is over? Will Teresa sell Joe out in a last ditch attempt to save herself and her kids? Tell us your thoughts in the comments below!