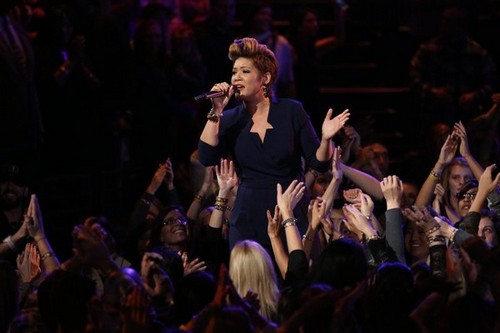 Tessanne Chin took the stage tonight on THE VOICE for her Top 8 video performance.  Tessanne Chin sang “Underneath it All” by No Doubt.  Tonight’s show the remaining artists from each coach, Christina Aguilera, Adam Levine, CeeLo Green and Blake Shelton team performed live for America’s vote and the chance to move on to the Top 6.

Judges Comments: “Adam says that it’s such and amazing moment; because there aren’t many songs that have such spice and flavor. Adam believed that this song basically is Tessanne and loved how soulful she is when singing. CeeLo says that it was awesome; it was impeccable and he has been to Jamacin. He believes she is the immense beauty that’s born from that place. Christina thanks her for listening and hearing her Jamacin accent in the song; it really made her feel like she could understand her much better.”

On last week’s show Tessane sang “If I Were Your Women” and the judges loved her performance.  The judges said this about her performance,  “Adam says that song is something nobody has done on the show before and really felt that it was solidifying her presence on the show as a contender and is so proud of her. Christina says that she heard her Jamaican accent a bit in the song and loves it so much; Christina enjoyed her so much and would love to hear more moments like this where she shows off her dimensions in her voice.”

It’s a special full night of The Voice tonight when the Top 8 artists sing in the hopes of being saved by your votes.    Musical sensation Robin Thicke will appear on tonight’s show.  Robun will sing “Feel Good” from his best-selling album “Blurred Lines.”  On tomorrow night’s results show two more contestants will be sent home.