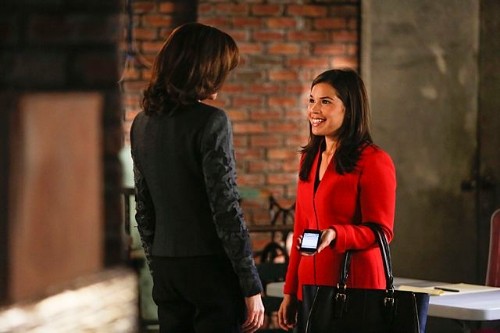 The Good Wife returned tonight to CBS and it was another great episode, I cannot wait till next week.  As usual, we will be providing you with the juiciest, previews and teasers out there.  We have a sneak peek video and some insight for you below on what is going on next week below.

On tonight’s show Alicia and Cary suspected that Lockhart/Gardner were spying on them when Zach discovered that the webcam on Alicia’s computer was being accessed remotely. Meanwhile, Will took on more than he anticipated when he cames to the aid of one of Alicia’s old clients, and Clarke Hayden returnd to offer financial advice to Florrick/Agos.  If you missed the episode we have a full and detailed recap, right here for you.

Spoiler alert: If you’re one of those people who doesn’t like spoilers, stop reading now! We have some juicy spoilers for you about the season 3 episode 8 of CBS’s “ICE, ICE, Baby.”

CBS’s Official Synopsis: “Florrick/Agos is going to get their first new client, but failure could lead to his death.  As Florrick/Agos move into their new offices, Alicia will attempt to block the deportation of an undocumented immigrant before he is sent to Mexico, where a cartel has threatened his life.” America Ferrera will return as Natalie Flores. Guest stars will include: Johnny Garcia as Tomas, Adyana De La Torre as Elena, Jeremy Shamos as Karl, Dominic Comperatore as DEA Agent Thorburn, Sean Haberle as Alvin, Roxanne Day as Christina, Julian Gamble as Judge Reardon, Jackie Hoffman as Judge Felletti, James le Gros as Judge Tolkin, Christina Rouner as Estelle, and AJ Cedeno as Consulate Worker.

On next week’s show Marilyn will be concerned about the ethical ramifications when Eli reconnects with Natalie Flores, and Robyn is going to try to be more like Kalinda.  Alicia tries to stop a woman from being deported to Mexico.

The Good Wife Season 5, Episode 8 “ICE, ICE, Baby” airs on CBS on November 17th, 2013. Check out the preview videos and photos from episode 6 below and let us know in the comments below what you think!