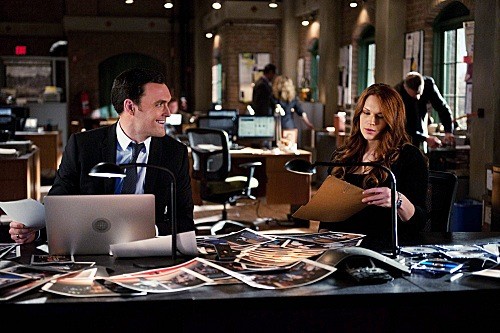 Tonight on CBS THE MENTALIST returns with a whole new episode called “Behind the Red Curtain.” On tonight’s show Jane hopes to get more information about Red John from the comatose Jason Lennon. Did you watch last week’s show? We did and we recapped it here for you!

On last week’s show the CBI team investigates when the body of a female army medic who worked with soldiers with PTSD is found near a military base.  Jane believes a witness with a bad memory may prove helpful.

On tonight’s show The team investigates the murder of an actor who was killed the night before the opening of the show. Meanwhile, Jane hopes to get the information he needs on Red John from his accomplice, Jason Lennon, who was shot by Lorelei and left in a coma.

Tonight’s The Mentalist episode 18 is going to be exciting, and you won’t want to miss. So be sure to tune in for our live coverage of The Mentalist — tonight at 10PM EST! While you wait for our recap, hit the comments and let us know how excited you are about this season of The Mentalist.  Check out a sneak peek of tonight’s episode below!

PLEASE NOTE: There was a 45 minute delay because of the basketball tournaments.  Once it was over our CBS affiliate did not air this episode.!