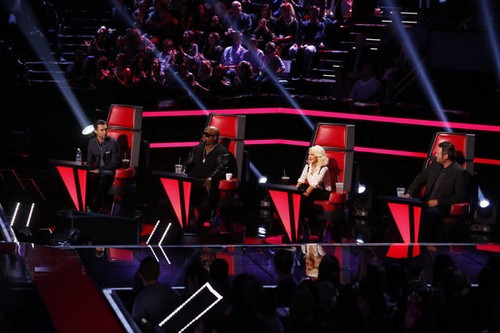 THE VOICE is one of our favorite singing reality competitions because the judges – definitely have a good time and are even quite funny. Tonight, The Voice season 5 will be returning for the last of a 3 night event  “The Live Eliminations”  on tonight’s show the teams perform live and the results of America’s and the coaches’ picks for the Top 12 are revealed.  In case you missed the last two night’s show we have the full and detailed Recap right here for you, NIGHT 1 – NIGHT 2.

On tonight’s show America’s vote will put through the top two artists from each team and the coaches will each save one artist leaving them to move on to the next phase of the competition. Carson Daly (“Last Call with Carson Daly”) hosts.

Tonight’s  The Voice “The Live Shows Premiere”  is going to be an exciting one, which you won’t want to miss. So be sure to tune in for our live coverage of NBC’s The Voice – tonight at 8 PM EST!   While you wait for our recap, hit the comments and let us know how excited you are about the new season of The Voice.

Carson Daly opens up The Voice tonight and reminds fans that the “Top 12” will be revealed tonight. Two members of each team will move forward based on America’s votes, and then each coach will “save” an artist. Out of the twenty contestants, eight will be sent home.

Team Blake (Shelbie Z, Austin Jenks, Ray Boudreaux, Nic Hawk, and Cole Vosbury) performs a rendition of The Edgar Winter Group’s hit song Free Ride. According to Carson only two of the artists currently performing will be advancing to the next round according to America’s votes.

Carson takes a moment to congratulate Blake Shelton on his CMA’s last night.

The results are in. America saved Austin Jenks and Cole Vosbury. Now Blake has to choose to save either Shelbie, Ray, or Nic. He is torn between the three but decides to go with his gut and saves Ray Boudreaux. Shelbie Z. and Nic Hawk are officially eliminated.

Team Ceelo (Amber Nicole, Tamara Chauniece, Jonny Gray, Caroline Pennell, and Kat Robichaud) takes the stage to perform the rock classic Give A Little Bit. Ceelo is very proud of his team, he believes every member of his team has the potential to win this season of The Voice.

The results are in. America saved Caroline Pennell and Jonny Gray. Now, Ceelo must decide to save either Amber, Tamara, or Kat. Ceelo says he is at a loss for words and loves the three of them equally. After a quick pep talk to the remaining girls he decides to save Kat Robichaud. Amber Nicole and Tamara Chauniece are eliminated, Ceelo joins them on stage to say goodbye.

The results are in. America has voted to save Jacquie Lee (the youngest contestant competing this season) and Matthew Schuler. Now Xtina must decide to save either Stephanie Anne, Josh, or Olivia. Xtina is having a hard time deciding who to save because she feels that she genuinely cares about the three remaining singers. After a long-winded speech Christina Aguilera finally decides to save Josh Logan. Stephanie Anne Johnson and Olivia Henken are officially eliminated.

Dax Shepard, of NBC’s Parenthood joins Carson on the stage. He jokingly says he knew which team was Ceelo’s the moment he saw them because it was “four hot girls and a guy that Ceelo probably thought was a girl”, referring to Jonny Gray’s extremely long hair.

Team Adam (Will Champlin, James Wolpert, Preston Pohl, Grey, and Tessanne Chin) takes the stage and performs a rendition of Safe And Sound.

The results are in for Team Adam. America has voted to save James Wolpert and Tessanne Chin. Now, it is up to Adam Levine to save either Will, Preston, or Grey. According to Adam the position he is in is “terrible.” He reluctantly opts to save Will Champlin. Grey and Preston Pohl are officially eliminated.