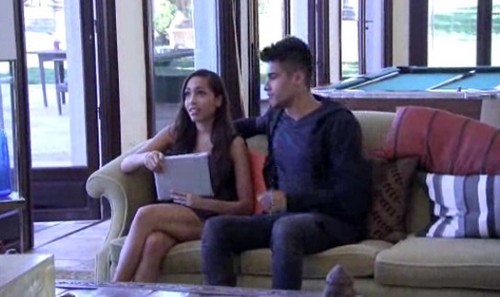 Tonight on E! their new musical reality show THE WANTED LIFE continues with an all new episode called, “Vegas Like A Pop Star.”  On tonight’s show when the band books a gig in Las Vegas, management declares it a “boys only” bonding trip.  Did you watch last week’s premiere episode?  We did and we recapped it here for you.

On last week’s premiere episode the members of The Wanted: Max; Siva; Jay; Tom and Nathan and their girlfriends moved into a mansion in Los Angeles to record their highly anticipated new album, but it wasn’t long before partying and an unexpected heath scare threatened the band’s continued success.

On tonight’s show when the boys will have to decided if it is the band or their girlfriends?  The band books a gig in Las Vegas, management declares it a “boys only” bonding trip, which doesn’t sit well with Siva and Nareesha. Nareesha is not very happy about this and gives Siva an ultimatum: “If I can’t come with you, then we don’t have a relationship.”  Nathan’s visit to the doctor results in a shocking diagnosis.

Tonight’s episdoe 2 of The Wanted Life airs tonight at 10PM on E!  We will be covering the show and bring you all the details of the shenanigans of Max, Siva, Jay, Tom and Nathan, so don’t forget to tune in.  While you wait for the recap, hit the comments and let us know how excited you are about getting a birds eye view of The Wanted!

Max’s brother, Jack, comes to LA for a visit. Max knows that Jack brings out his immaturity but they have fun. Like jumping off the second floor balcony into the pool.

Later when the boys meets up with their day to day manager, Tom decides to play a trick on Jay by passing off a chair he know is broken. Jay nearly falls off the chair when it sits in it but everyone can laugh. However when their manager mentions upcoming gig things abruptly go south. The trip has a no girlfriends rule. Tom can leave Kelsey but Siva doesn’t want to leave Nareesha behind.

Max is calling his mother whose back in the UK. He has a really good relationship with her.

Nathan makes it to the doctor. He finds out that he had the same thing Adele has. The procedure he needs can go either way. The other guys find out about through management. Their manager tells the guys to come together and support Nathan.

The fans try to cheer up Nathan as well by sending in remedies for his throat along with the usual plush toys.

Tom confronts Siva about their Vegas trip. He tries to get Siva to change his mind to no avail. But when Nathan strains his voice, and go against  doctor’s orders, in order to talk Siva around is when Siva agrees to think about it.

Their head manger calls in Siva for one on one. The last time the band went to Vegas he broke up with Nareesha so he doesn’t want that to happen again. His manager tells him the band isn’t just four guys so he has to go. Siva decides to go.

Nareesha is both saying goodbye and laying down an impressive guilt trip. She knows she’s not second I his life. He just can’t say “No” to work.

Upon arrival in Vegas the guys quickly meet up with a group of girls. So Siva feeling like it’s not about guy bonding anymore goes off by himself. The other guys try to get him back but nothing works.  Siva only comes back to dine with the guys when the girls are gone.

The Wanted perform “I Found U”. Nathan actually danced instead of sing but it was a good performance. Everyone is on high until the guys notice that Siva had immediately disappeared after their song.  Siva is actually video chatting with Nareesha.

The next morning, Max can’t help but to still be upset about Siva abrupt exit. He’s disappointed that Siva couldn’t enjoy some time with guy for once. Tom is still hurt about it as well.  He just feels lucky his girlfriend lets him breathe.