BY Siyana Riley on April 18, 2013 | Comments: one comment
Related : Dancing With the stars, Dancing With The Stars Season 16, Sean Lowe, The Bachelor, Tom Bergeron 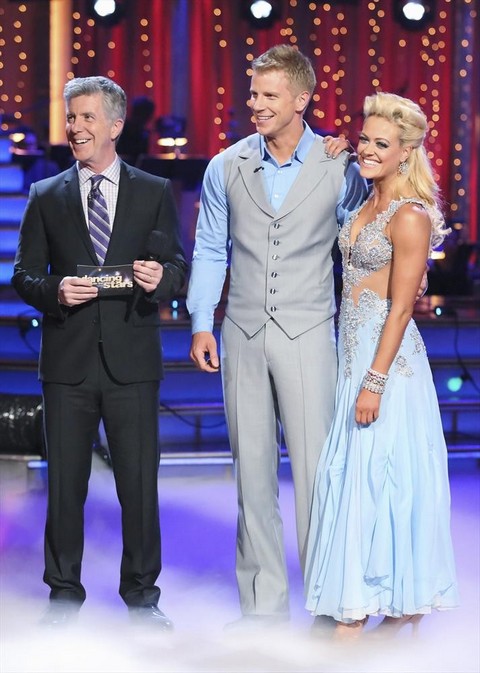 Tom Bergeron seems to have invited the wrath of Sean Lowe when he announced backstage after Dancing With The Stars that Sean was safe for ‘another week’. When asked what that mean, he went ahead and said, “My understanding is that the marriage ceremony of Sean & Catherine [Giudici] is scheduled to be broadcast on ABC in August.” Of course, Sean was NOT happy. After the camera zoomed in on his face, he seemed to be angry and confused [you know, because it took him several seconds to understand what actually happened].

We’ve reported pretty extensively on Sean Lowe and Catherine Giudici’s wedding, largely because it’s doubtful that the wedding will even take place. Sean has been hesitant to announce anything about the actual wedding, and whenever he’s been asked about it, he always says that it’ll take place on television [of course] and it will be ‘soon’. Now that Tom’s pretty much outed him, is he upset because now he can’t back out of his marriage to Catherine, or is he upset because Tom just ruined the ratings of their eventual telecast confirming the wedding?

Catherine and Sean are, for all intents and purposes, getting an arranged marriage. Sure, it’s arranged within the confines of a reality television show, but they got together because it was mutually beneficial to each others’ careers, and as long as they don’t get married, people will still be interested in them and their drama. The minute they get married – people move on to the next trainwreck on reality TV and start wondering who the next Bachelor will be. Sean and Catherine know this, and so of course they’ve been dragging out the wedding announcement for as long as possible. In all honesty, it wouldn’t be surprising to see them ‘break up’ right before their wedding, and then ‘get back together’ a few months later. After all, that seems to be the playbook that most couples from the Bachelor seem to be following.