Tom Cruise Recruiting Britney Spears Into Scientology, Is She The Type? 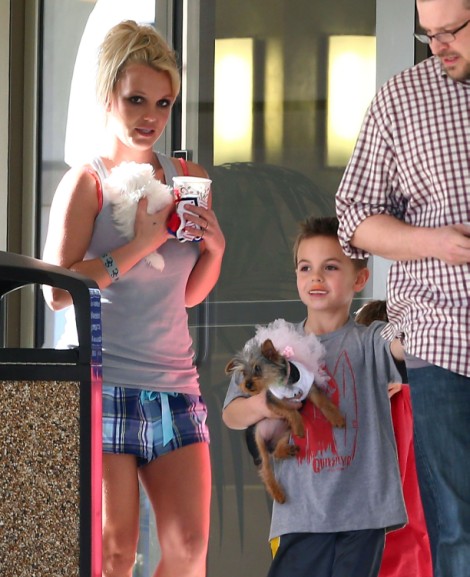 When I first read this I thought Tom Cruise was trying to rebuild his image. Since Katie Holmes Munsoned him he’s been the black sheep of Hollywood. Yes, some stars have thrown him some pity invites but the dude is definitely persona non grata. So what’s he thinking? Build Britney Spears back up and he’ll get back the keys to the kingdom? It’s a mighty tempting offer. We all love a comeback and those X Factor appearances just didn’t do it for her. Wouldn’t you love to see Britney humping the Super Bowl halftime camera like Beyonce did last night? Could it be possible? Could Tom Cruise make it happen. He’s saying he can but there’s only one catch, she has to join Scientology first.

According to Now magazine, Tom tried to turn the troubled singer to Xenu years ago but that was when she was still up Sam Lutfi’s controlling ass. Dear Lord, what’s worse – Scientology or Sam Lutfi?

“Tom tried to reach out to Britney in 2008 when she left rehab,” an insider said. “But she was surrounded by negativity and things didn’t work out. He’s heard she wants to get her acting back on track and focus on her music again. He thinks Scientology can help.”

All I can think about is Mel Gibson. Didn’t he try to save Britney when she was shaving her head and threatening paparazzi with umbrellas? Why do all the crazies think they know what it takes to help other crazies? Sure, they might be able to understand the crazy but I doubt they are the best mentors at the end of the day. Just ask Charlie Sheen how effective he was with Lindsay Lohan.

Ah, but this is a hard one! I kinda feel like I’m selling my soul to the devil – or negotiating Britney’s. On the one hand I want to see her return to her former glory. On the other hand, if Tom Cruise recruits her and succeeds in stifling those voices in her head the silly religion might have another poster child and that could potentially set Katie Holmes’ good work back years. Still… Brit Brit needs some help. Check out the pics below. She’s dressing all skitzo again. Jason Trawick may have been a beard but at least he kept her lid on straight in front of the cameras. Poor thing, she needs something. Do you think a Britney Spears/scientology collaboration is the answer? In my head I know the answer should always be no but Tom Crusie can do ANYTHING, right? He’s playing with my heart!