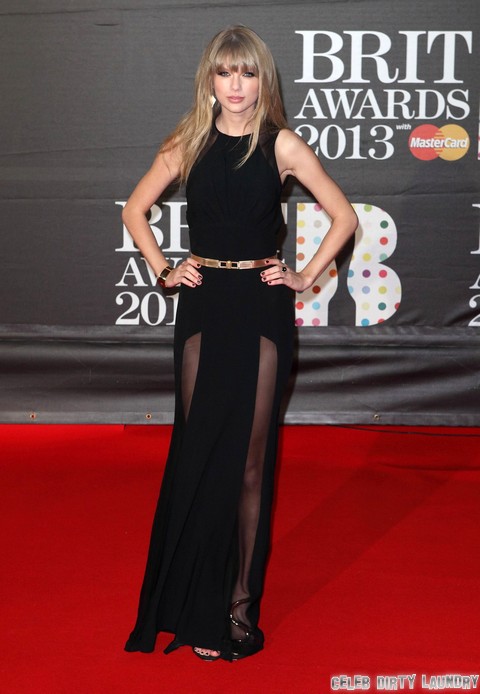 Taylor Swift will never cease to amaze us. Not only is the man-eater struck down with a serious case of co-dependency, but she’s also dipped her grubby paws into the UK talent pool of singers. First it was Harry Styles, and now it’s a new gentleman/singer who goes by the name of Tom Odell.

Allegedly, according to latest reports, the two lovebirds (please note: this is not love – it’s Taylor Swift) were slaughtered at an authentic English pub, and then headed out to the aptly named Groucho Club afterwards. Unfortunately, the gods did not play their cards in Swift’s favor at the Brit Awards, but they did shoot an arrow of love into Swift and Odell’s pretty bums. Odell won the Critics’ Choice award at the ceremony held last night and went home with not just the prize, but also Swift’s pumping, bleeding heart – no, he’s not a cannibal; imagination people!

This serendipitous meeting was ignited in January, when Swift tweeted about Odell’s cover version of “I Knew You Were Trouble”, writing, “So I was already a @tompeterodell superfan… Now I’m just floored. This is so good.” Odell responded, “Yessssssss pleased you like it… xx.”

And then their Twitter babies were born and they lived happily ever after… Not! Odell was interviewed about the Twitter interaction and the dodgy romance rumours. To this, he said, “That’s odd, isn’t it? That’s crazy. That’s mad. Well… maybe she is. Quite nice. She’s a pretty girl.” The interviewer then asked Odell if he “was ready for a One Direction feud”, to which he responded, “Perhaps. I don’t know. I’ve never met her before, so it’s strange, flirting with her. But if she is, then cool. I should have flirted more back, maybe.”

And there you have it, Celeb Dirty Laundry readers. Taylor Swift’s latest victim is the popular Tom Odell.