Tori Spelling’s Revenge on Dean McDermott for Cheating with Emily Goodhand – Making Him Pay For One Night Stands? 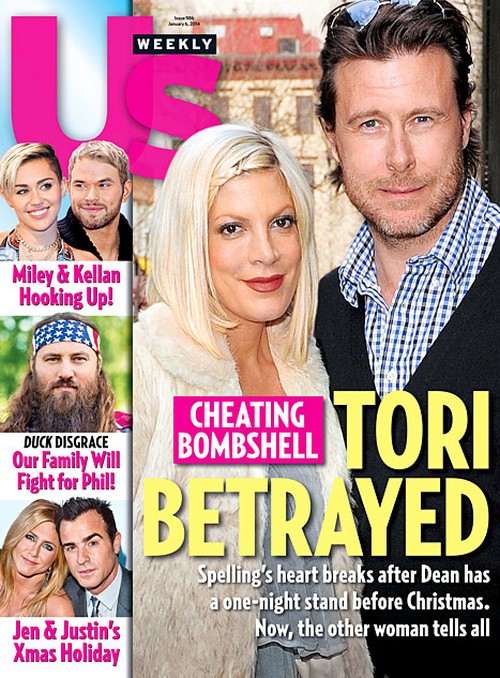 Does Tori Spelling care that her husband, Dean McDermott, almost definitely cheated on her with some random woman? And that he’s probably cheated on her many other times? Because Tori is not acting like a scorned wife or someone with an axe to grind. She’s sounding as chipper as ever, even posting a Christmas-themed picture with her four children on Twitter, signed by both her and Dean.

Under the caption, Tori wrote, “I wanted to take a minute to wish each and every one of you a very Merry Christmas, and for those of you who don’t celebrate Christmas, a very happy holiday season! As another year comes to a close, I can’t help but feel so grateful for all of my blessings. My beautiful family, my amazing friends, and of course, all of you!”

She also added that her entire family [pointedly including Dean as well] were spending Christmas together, ‘cuddling, cooking, baking, unwrapping gifts, eating, watching movies and counting our blessings.’

What’s the saying? Once a cheater, always a cheater. Dean left his previous wife for Tori, and now he’s cheating on Tori with a string of one-night stands, including Emily Goodhand. Let’s face it, even if he pretends this was a one-time deal, people don’t just randomly hook up with one-night stands and then get away with it. He’s been doing this for a while, and everything Emily told US Weekly supports that. She claims Dean told her that he and Tori have a ‘sexless marriage‘, and dudes don’t say that unless they have every intention of hooking up with the girl.

But even then, I don’t think Tori cares. In fact, I actually have a feeling she’s happy about the publicity. She and Dean have been ignored for so long, and it’s gotta sting for someone who was a major television star. Now, she’s a failing reality star who has no money and barely any fame. This way, she ends up looking like the jilted lover and can parlay that into sympathy and more attention. Plus, she and Dean got together for publicity, so it kinda makes sense that they would end for publicity.