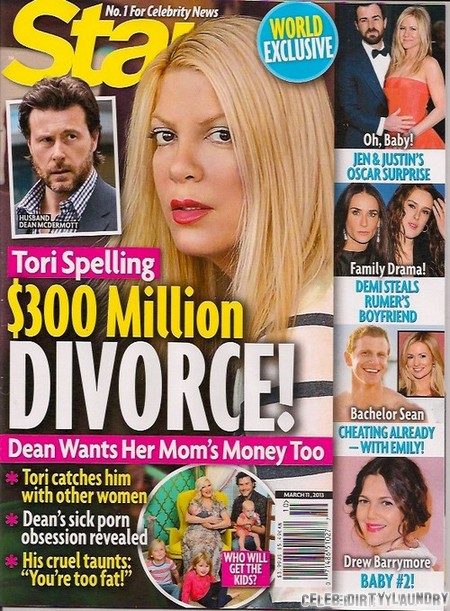 According to the latest issue of Star magazine, Tori Spelling and her husband Dean McDermott are getting a divorce! The tabloid reports that Dean is after Candy Spelling’s money, as well. Ha! Tori couldn’t even get her hands on Candy’s money, how does anyone think Dean could?!?

According to the magazine, Tori has been catching Dean with two other women over the years. A snitch said, “Tori believes Dean has been seeing two different women for years. She’s so suspicious, she monitors his email and put a tracker on his phone. She’s even had a private investigator follow him.”

The snitch goes on to say that Tori “confronted Dean about his indiscretions. She tried to demand answers, but he denied everything.”

Another source told the publication that Dean pokes fun at his wife’s looks. Oh snap. The source said, “Dean always jokes that Tori has a horse face. He doesn’t find her attractive!”

If he didn’t find Tori attractive then why did he divorce his first wife so that he could marry her?!? Even worse, the magazine claims that despite all of the nasty comments, he still wants to have sex with her constantly. The source said, “They argue about sex all the time – he can’t get enough!”

The source said that Tori “even tries to justify his cheating with the sex-addict line.” Another source said, “Dean is moving out for good. He’s been studying Tori’s and Candy’s finances for months and he says he will use the kids as leverage to get big money.”

We’re calling BS — just because. What do you think? Is there some huge divorce deal in the works between these two?!? Hit the comments and let us know your thoughts!