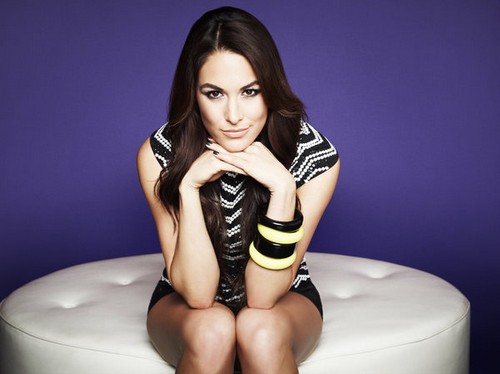 Tonight on E! TOTAL DIVAS continues with a whole new episode called, “Seeing Red.” On tonight’s show Brie has trouble accepting Bryan’s increasing fame.  Did you watch the last week’s crazy episode?  We did and we recapped it right here for you.

On  the last episode Nikki moved in with John Cena but was shocked when he made an unexpected demand. Meanwhile, when Eva Marie was asked to announce on live TV, she contemplated cheating.  Ariane’s health issues got worse, that means her tag-team partner Trinity had the opportunity to prove she had what it took to be a strong solo Diva.

On tonight’s episode Nattie suspects Eva Marie of trying to get too close to TJ. Nikki must decide if she can accept John Cena’s demand, while Brie has trouble accepting Bryan’s increasing fame.

Tonight’s episode of Total Divas begins at the WWE arena, for Monday Night Raw. Trinity and Ariane are preparing for a match. Ariane reveals that her and Vinnie haven’t had sex in a long time, because she is always too tired. Trinity tells her she needs to take care of that, she thinks that is why Ariane is always so grumpy.

The next day Eva Marie is training, she is meeting with Nattie’s trainer TJ. She admires Nattie, so she wants to train with her trainer. Nattie arrives at the gym, and is less than impressed to see TJ training Eva Marie, he never wastes his time training newbies.

Ariane has an appointment at the gynecologist. She wants to know why it is so painful for her to have sex. The gynecologist examines her, and finds nothing physically wrong with her. She does recommend she try sex therapy.

Nat wants to spend the day with TJ, but he has already made plans to train with Eva. Nattie is upset.

Brie is meeting Bryan at the park. He doesn’t show up, he calls her instead and said that he isn’t going to be able to make it, he has seven interviews.

Nattie crashes TJ and Eva Marie’s training session. She spies on them for a few minutes, and is not impressed to see Eva isn’t wearing a bra, and is putting TJ in headlocks and rubbing his head on her breasts. Nattie goes into the weight-room and has Fandango come out and work in another ring with her. It doesn’t take long for TJ to notice them working out next to him, and he is upset. He storms out of the Performance Center.

Nattie yells at Eva after TJ left. Eva tells her that she has nothing to worry about, she is engaged, and has no interest in TJ. Nattie storms out, Eva thinks she has lost her mind.

Nat gets home, and TJ is waiting for her, he is still upset about the Fandango situation. TJ explains that Eva Marie worships Nattie, and he was just trying to help her out. Nat feels dumb for being jealous of her, she makes up with TJ.

Brie and Bryan are finally getting some time together, and are out to eat lunch. Bryan’s phone is blowing up though. He answers his phone and heads outside, leaving Brie alone to eat lunch by herself. She is annoyed, when he gets off the phone, she tells him to get the check so they can leave. On the way home she reveals that she wishes she was dating the Bryan she met in the beginning, and she feels like he doesn’t care about her anymore.

Brie and Nikki are chatting after yoga. Brie is complaining about Bryan having no time to spend with her. Nikki thinks that Brie is mean to him, and she should be happy for him that he is so successful. Brie realizes her sister is right, and she needs to support Bryan more. She apologizes to Bryan about being so needy, and he apologizes to her for not making enough time for her.

Nikki heads out to dinner to meet with John, and discuss the co-habitation contract. John isn’t budging, he tells her that the contract is necessary. Nikki feels like if she doesn’t sign the contract, their relationship is over. John reveals to Nikki that he is supporting his Mom, his brother and his pregnant wife, and his other brother who has medical needs. He doesn’t want to sacrifice being able to provide for all of them, and that’s why he needs Nikki to sign the paper, to cover himself financially. Nikki agrees to sign the paper.