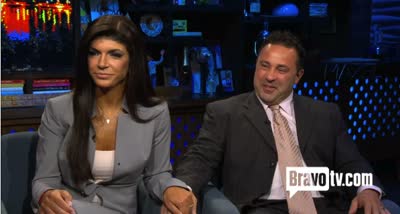 On a Watch What Happens Live special Teresa and Joe Giudice sit down with Andy Cohen to discuss their federal indictments. They are accused of fraud on 39 counts. The interview was full of tough questions. Teresa and Joe don’t shy away from the questions.

Andy started the interview saying he has spoken to both of the Giudices’ lawyers. He was told there were certain things he could not ask Teresa and Joe because it would impact their defense. Andy said he would honor that request. They were dressed in conservative gray suits. Teresa is usually dressed to the nines but she probably wanted to show she was taking this interview seriously. Teresa and Joe held hands the entire interview.

There were a few times when both Teresa and Joe answered a question saying they don’t want to focus on that item right now. They focus on the bigger issues. There were also a few questions Joe and Teresa felt they should not answer. They feared saying the wrong thing and hurting their case.

Joe and Teresa said the allegations came out of no where. Joe had an idea he was being investigated a few years ago. The IRS contacted him but he didn’t take it seriously.

Teresa said the rest of the cast have been supportive of her and Joe. She got text messages and also phone calls from her brother Joe Gorga and his wife Melissa. Andy asked if their four daughters know what is going on. Teresa said her 12 year old daughter Gia has an idea something big happened but her and Joe don’t give her specific details.

Andy asked who would take care of the Giudice girls if they both went to jail. Joe quickly said Joe and Melissa would not be their caregivers. He also said the girls may not want to stay with the Gorgas after what was said about Teresa on television. Joe would want one of his siblings to care for his girls. For a minute I thought Joe was going to lose it when Andy brought up the subject. Joe quickly composed himself.

Andy asked Teresa how she can be so strong during this trying time. She says she has no choice but to be strong for her husband and four daughters. He asked about criticism she received for her activities following the indictments. Teresa said there is no reason for her to hide in her house. She wanted to set a good example for her daughters that no matter what happens you still have to work and keep going. Teresa feels she would be damned if she stayed home and damned if she didn’t. She said if she hid in her house people would say she’s falling apart and how could she let this happen.

As strong as Teresa is, she admits she has a lot of emotions regarding her situation. She has sleepless nights. Teresa said she was numb when she was indicted. She said her and Joe are good people and couldn’t believe this was happening to them. There were a few times the couple seemed to still be in denial over the severity of the situation. Teresa said she didn’t understand all the charges against her. Joe said he was not worried about being deported because he has a green card. Andy asked Teresa if she could survive in jail. She said she doesn’t think about it because she did nothing wrong. Teresa said she stayed out of Joe’s business and didn’t know a lot of what was going on. Joe complimented his wife saying she is much stronger than her brother. Again, I thought Joe was going to lose it. I guess the families still have residual bad feelings from before they made up.

Both Teresa and Joe said they didn’t live beyond their means. Joe said Teresa had to shop for the show, and could not wear the same clothes twice on camera. He does the family finances and would know if Teresa spent too much.

Andy finished the interview asking Teresa if she regretted doing The Real Housewives of New Jersey. She said there were good and bad things that came out of doing the show. He wished the Giudices good luck in their trial, which begins in February 2014.