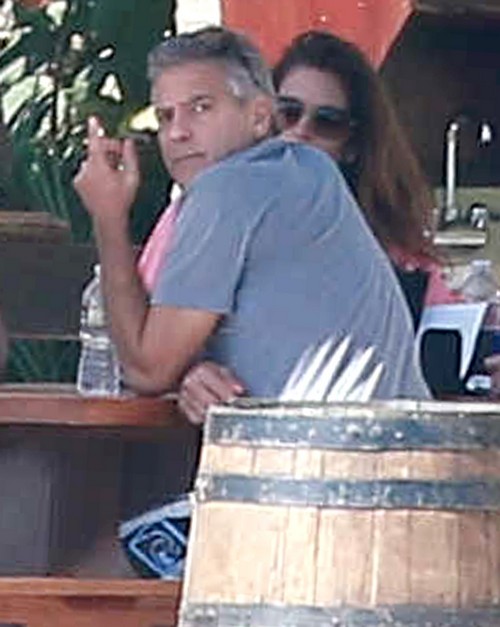 The Amal Alamuddin pregnant rumors have been going around for the past couple of weeks and now there is more photo evidence to back up that assertion. Amal Alamuddin and her husband George Clooney are featured on the cover of the latest issue of “Star” magazine. On this week’s edition of the magazine, the happily married couple appear with their happy baby news. Currently, George Clooney and Amal Alamuddin are spending the holiday season with his close friends Rande Gerber, Cindy Crawford and their kids Presley and Kaia in Cabo San Lucas, Mexico. Amal is seen in the photos wearing looser clothing that normal — and it’s obvious that she is hiding a baby bump.

George has previously said that he has never wanted to be anyone’s father, but the two got married so quickly that we were all left wondering if it was a pregnant shotgun wedding. Amal’s strictly religious family would’ve had a royal fit if their daughter announced a pregnancy before their highly publicized wedding.

The magazine reports that George and Amal “conceived a baby during their romantic honeymoon in Seychelles – and though they’ve yet to announce the pregnancy, they couldn’t be happier.”

Another source said, “This has been such a whirlwind for Amal. First she married one of the most famous men in the world after a short, intense romance, and now she is expecting her first child so soon after the wedding. Everything is happening so fast, but she is so thrilled about all of it!” The insider added, “It’s adorable how proud and excited he is. Having a baby with Amal is the best thing that’s ever happened to him. He honestly can’t wait to be a dad.”

Amal Alamuddin is pregnant and George Clooney is over the moon over the whole thing. We never thought the day would come that George would be anyone’s father, but we also thought that he would never get remarried and he has proven us wrong. Perhaps now that eating disorder will disappear so that she can nourish her baby properly.

Now we just have to wonder what they are going to name their little bundle of joy. See pictures of Amal’s baby bump in Mexico below!

George Clooney, his wife Amal Alamuddin and their friends, Cindy Crawford, Rande Gerber and their children Presley and Kaia relaxing on the beach in Cabo San Lucas, Mexico on December 22, 2014. The famous friends have decided to spend their Christmas holiday together in paradise – by FameFlynet