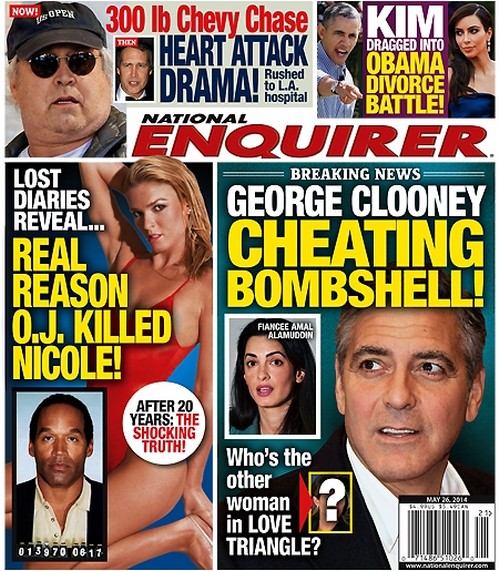 It took approximately one week for the tabloids to jump on the George Clooney cheating train, and to be honest, I’m surprised it took them even this long. I guess they wanted to wait for the news of the engagement to sink in, and then go ‘Surprise! George is cheating!’

George recently got engaged to his longtime [for him] girlfriend, Amal Alamuddin. They’d been seeing each other for the better part of 2013, which already raised some eyebrows considering her impressive credentials and his not-so-impressive list of ex-girlfriends. And then, George shocked the world by proposing to Amal at the beginning of this year, marking an end to yet another Hollywood bachelor.

Of course, people have already been making bets on how long this relationship is going to last. George himself said that he’s not a marriage type of guy, and he has a hard time seeing himself being that committed to one person for the rest of his life. Yet here he is, ‘committed’ to Amal.

However, according to the latest cover issue of the National Enquirer, George is already cheating on Amal. He’s apparently having an affair with another woman, one who isn’t as intelligent or put-together as Amal, a.k.a. a lot more like his usual type of girlfriend. Amal reportedly doesn’t know about the affair, but her friends are warning her to watch out for George flaking out on the wedding or canceling the engagement, breaking her heart and humiliating her in the process.

Eh, I don’t think George would go through all the trouble of proposing to Amal and then setting up photo-ops and tabloid reports on the engagement, and then cheating on Amal on the side. I can see him breaking it off with Amal if he thought he couldn’t commit, and I think he has enough respect for her that he would split from her before cheating on her.