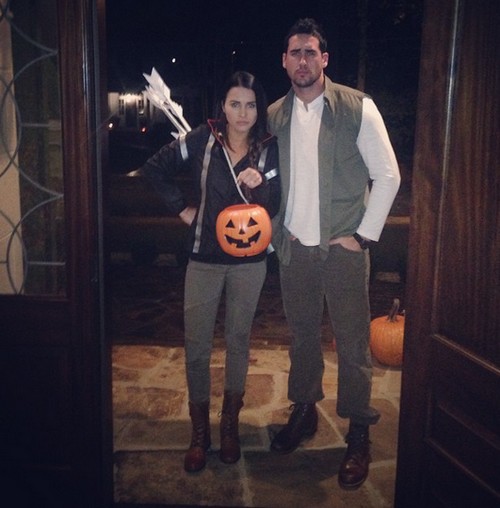 Andi Dorfman picked Josh Murray to ‘win’ The Bachelorette 2014 because he was the best candidate for media showmance propaganda. The dude has all-American good looks and a quick smile – more importantly he was willing to play along with scripted romance. But things are changing and we hear rumors of a Bachelorette breakup are in the offing.

When a girl signs up to be the next Bachelorette, she’s signing up to give the next few years of her life away on a fake showmance, a fake media wedding, and a fake media relationship. Andi Dorfman knew what she was getting into when she signed up to marry Josh Murray on The Bachelorette, but she probably didn’t realize that the extent of his interest didn’t quite match hers. Not only does Josh’s family despise Andi but he was getting less money than her [Andi was the star of the show], less attention than her, and was being forced into an engagement that neither of them wanted. People in love who get engaged for real don’t sleep with Nick Viall hours before their fantasy date with their future husband. No matter how appealing the money and the attention seemd at the time, there’s a point where all fake couples can’t take it anymore.

Again, unfortunately for Andi, that point is coming earlier for Josh than for her. In other words, Josh Murray is dumping Andi Dorfman. According to our sources, Andi most definitely does not want to end this little rendezvous with Josh Murray, but Josh is starting to doubt that he can go through with the wedding. I guess you could say Josh is getting wedding jitters, except do you get ‘jitters’ when you’re not even in love with the bride? Andi and Josh do a good job faking it for the camera but is Josh getting enough compensation to put his entire future on the line? Meanwhile, Andi’s dreams and hopes are starting to slip away from her, as is her [likely] two-year plan of engagement, marriage, divorce, ending with another reality show.

Now Andi Dorfman’s being hung high and dry by her supposed fiance, and she will have to pretend that she’s heartbroken and devastated when in reality, she’s just trying to figure out how to prolong her fifteen minutes of fame. I suppose there’s always Bachelor in Paradise, no? The Andi Dorfman/Josh Murray fake relationship drama will continue to last them a couple of media cycles, but eventually, the public will wise up and move on.