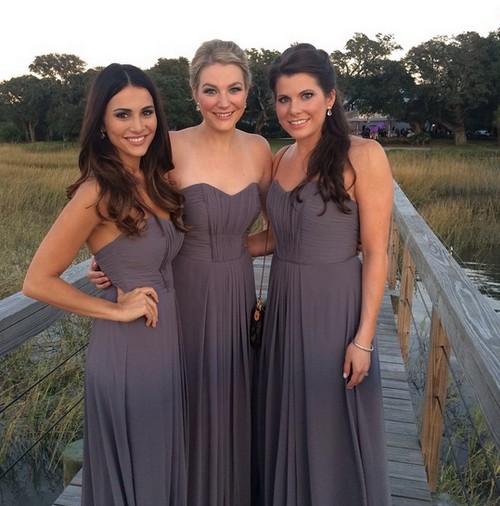 The Bachelorette Andi Dorfman and Josh Murray took a page out of Nikki Ferrell’s and Juan Pablo’s playbook, almost following to a ‘T’ their fake showmance pattern. I mean, everybody already knew that Andi Dorfman and Josh Murray were in a showmance, right? I think it’s a requirement that everyone who participates in The Bachelor and The Bachelorette must sign away their love lives to the show, probably in blood. Anyway, Nikki “dumped” Juan in a break up, according to an unnamed source of People Magazine’s. Apart from mysterious sources we do know that Nikki dropped Juan from Twitter at the weekend.

Uh, how does a couple break up if they were never really together in the first place? Just like Nikki Ferrell and Juan Pablo, Andi and Josh are faking their entire romance and engagement, all for publicity, so a break up is just a matter of when, not if. The only difference is – Josh Murray is much less of a doucebag than Juan Pablo, which is why Andi and Josh are lasting a bit longer.

There is always that possibility that Andi Dorfman and Josh Murray would actually make it down the aisle for their wedding, and maybe even capitalize on that wedding to increase their media cache. But as we’ve been saying for the past few months, it is much more likely that Andi and Josh pulled the trigger on their fauxmance, realizing that they couldn’t go through with it. Not to mention that sources report that Josh’s family seem to despise Andi, as we’ve explained.

Andi Dorfman and Josh Murray need to take note: after all, not everyone is Kim Kardashian, no? Not everyone – no matter how much of a famewhore reality star they are, can marry exclusively for fame and her reality TV show only to divorce their partner a few months later and still be on top of the paparazzi’s and entertainment media’s most wanted list.

What do you guys think about Andi Dorfman’s coming break up with Josh Murray? Will anybody be surprised, even a teeny tiny bit? Let us know your thoughts in the comments below.