Andi Dorfman and Josh Murray Family Feud: The Murrays Despise The Bachelorette After Nick Viall and Snub of Aaron’s Engagement 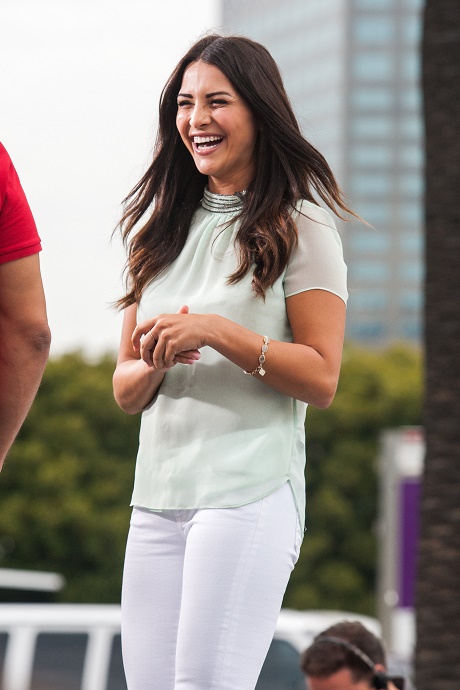 The Bachelorette 2014 Andi Dorfman and Josh Murray’s engagement deserved applause, now we want to issue congratulations to Aaron Murray on his engagement to girlfriend Kacie McDonnell! We figured we should take a moment to celebrate the couple’s happy news seeing as how Aaron’s brother Josh Murray and future sister-in-law, Andi Dorfman of The Bachelorette, didn’t even congratulate the couple or seem to acknowledge their engagement.

Come to think of it, when was the last time Josh or Andi interacted with any members of Josh’s family on social media? As a matter of fact, Aaron doesn’t even follow Andi on Twitter anymore. Remember that nauseatingly close and tight-knit Murray Family that we saw during Josh’s hometown visits on The Bachelorette? Well, sources say that Andi Dorfman came in like a wrecking ball [Miley Cyrus voice] … and Josh is completely estranged from his family and hasn’t spoken to them for weeks.

So, what happened to the “All American” Murray Family with the seemingly solid bond? Well, long story short – Andi Dorfman happened. CDL spoke to a few sources close to the Murray Family, and the general consensus is the tension between Andi and Josh’s family started during the live finale show. The Murrays seem to enjoy Andi during the hometown visit we saw on television, but a few weeks later Nick Viall announced on national television that Andi had sex with him and cheated on Josh Murray. Naturally, Josh’s family was mortified for him and hurt, but they were even more upset by the fact that Josh had no self-respect and was totally cool with Andi embarrassing him like that in front of the entire world. After the Bachelorette finale, everything went downhill from there.

Remember the break that we told you Josh and Andi took, but they insist they never broke up at all? Well, during the “break” that supposedly never happened, Josh Murray went crying to his family about how horrible Andi is, and that she is forcing him to do events that he doesn’t want to do. And, to top it off, she quit her job without even discussing it with him, and just expected Josh to work as soon as the show was over and support her. A few days later Josh went crawling back to Andi, but his parents weren’t so quick to forgive her, and all of the dirty details that Josh revealed to his parents just added fuel to the fire and gave them even more reason to hate Andi.

A friend of the Murray Family revealed, “Josh is a Momma’s Boy, so every time he and Andi get in a fight he goes running to his parents and tells them what she did and how horrible she is. Eventually, he goes back to Andi and forgives her, but his parents don’t.”

The bottom line is – the Murray Family hates Andi Dorfman, and as long as Josh Murray is with Andi, he basically is not a part of his own family. His parents have made it very clear that Andi is not marrying into their family, and if Josh says, “I Do,” he and his new bride are on their own. Even his own brother and sister, Aaron and Steph, have cut all ties to Josh and Andi. The Murrays are embarrassed by all of the scandal that Andi has brought to their family, and they see right through her and know she is only using Josh to further her entertainment career.

So, have you been following Andi and Josh’s disastrous relationship since The Bachelorette finale? Do you believe they are truly in love, or are you finally starting to see what we have been saying all along – Andi Dorfman is desperate for fame and is using Josh Murray to land another TV show? If Josh’s entire family agrees and has cut off Andi and Josh, then there must be some truth to it, right? Let us know what you think in the comments below!