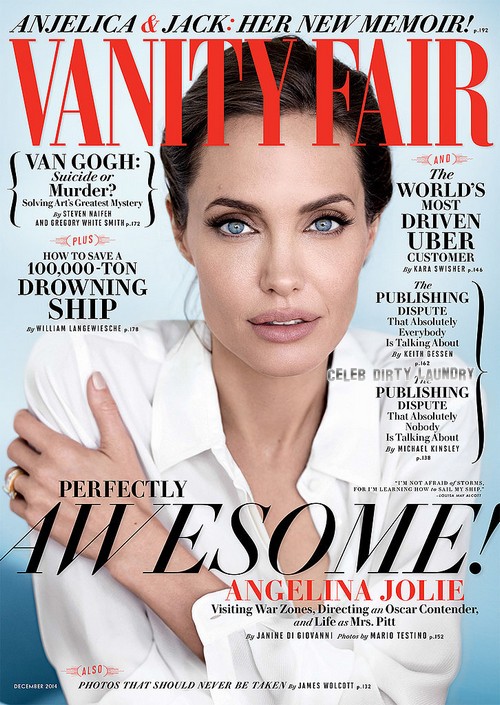 Angelina Jolie and Brad Pitt are married, but what’s interesting about their marriage is that it was so different from when Brad Pitt and Jennifer Aniston got married. For one thing, People Magazine was far less involved in the arrangement, as were publicists and the media. Heck, people didn’t even know that Brad and Angelina got married until the Associated Press dropped the bomb. The rumor always was that Brad and Jennifer met through their publicists, and started dating at the behest of their teams. I mean, clearly the guy felt there was something missing, right? Otherwise his explanation for just up and leaving Jennifer doesn’t make sense, especially if you believe his claim that he didn’t cheat.

Anyway, Angelina Jolie and Brad Pitt are now married, and there’s already a mile’s difference in their post-wedding interviews. Brad has already gushed about how he’s found his soul mate and how he’s in love with Angelina, etc. Granted, he was promoting Fury at the time, but he was being obviously genuine.

And now, Angelina Jolie covers the December issue of Vanity Fair Magazine, explaining, “It does feel different. It feels nice to be husband and wife.” That’s all well and good, but I love her underhanded diss towards Jennifer Aniston, even though she didn’t mean it. I know it’s silly to play teams so long after everything went down, but when Angelina describes the plot of her next movie, By The Sea, there’s a very clear parallel between her marriage and Brad’s and Jennifer’s marriage.

For those who don’t know, the film will deal with a married couple who are slowly drifting apart, not all dissimilar from Brad’s situation with Jennifer when he met Angelina. And Angelina even adds, “A few friends asked if we were crazy… [A film about] a married couple going through some difficulties… and I’m directing him.” Except they’re secure enough to work on this film without it being a problem, a fact that clearly didn’t precede Brad’s thoughts when he began Mr. & Mrs. Smith. Oooh boy.