Angelina Jolie Finally Pregnant With Twins Thanks To IVF – Baby Bump During Her Wedding? (PHOTO) 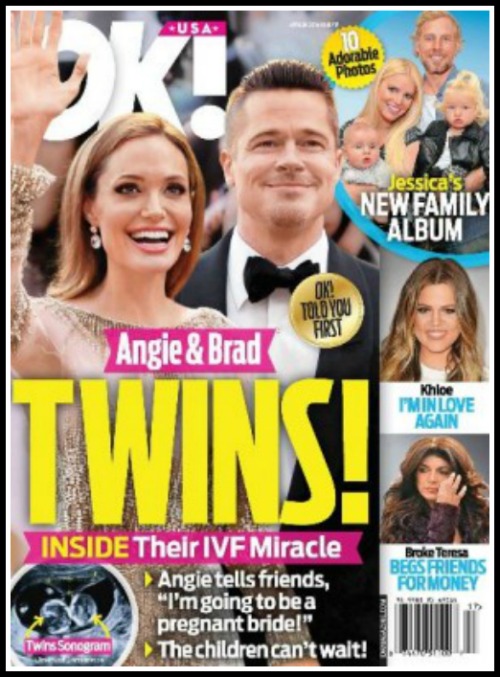 Angelina Jolie is having twins… again! I know, I know. If Angie really did get pregnant as often as the tabloids said she did, she’d be some sort of unstoppable medical marvel. Unfortunately for the medical and miracle community, she is probably not having twins again, despite OK! Magazine’s best efforts to convince us otherwise.

They claim that Angelina’s gotten pregnant with twins using IVF, and she’s apparently telling her friends, “I’m going to be a pregnant bride.” A ‘source’ also adds that the rest of the children are ecstatic and can’t wait to meet their new siblings.

Right. Let’s break this down, shall we? First of all, IF Angelina is pregnant, then it’s very possible that she could be a ‘pregnant bride’. Considering that Unbroken is releasing in the fall, Angelina and Brad Pitt would do well to capitalize on their wedding buzz to push the movie onto the awards radar. After all, what better way to cap off 2014 than with a wedding and a historic Oscar win? And if you think I’m jumping the gun with the whole Oscars thing, think again. The Oscar campaign for Unbroken has already begun, several months ahead of its closest competition.

Anyway, it’s possible that Angie and Brad will get married this year – but at the same time, unlikely that she’s pregnant. I mean, she’s not stupid. She already has six children to take care of, plus several films to promote. I don’t think she’s going to risk her health by putting herself through a pregnancy right now, and even if she was, when would she have time to give birth during awards season?

In other OK! news, Khloe Kardashian is ‘in love again‘, with French Montana. If Khloe really ‘is in love’ again, she better be careful. She’s more than likely to get her heart broken again, if the rumors about French are true.

Finally, Teresa Giudice is reportedly begging her friends for money. She’s completely out of cash and assets after having to pay fines for the fraud charges, and she’s stooped to begging for anything she can get.