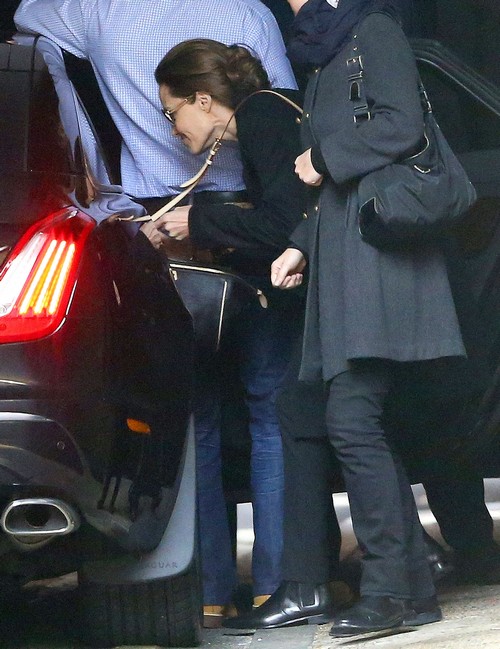 Angelina Jolie and UK Foreign Secretary William Hague spent a couple days visiting some war-torn regions in the Middle East and Eastern Europe. They flew into the Bosnia last Thursday, where they were reported to have met with rape victims, Bosnian leaders, NGO workers, and social activists.

Jolie and Hague are both very passionate about this issue of bringing the spotlight to warzone rape, and they’ve worked together in the past on it.. As we know, Jolie also spent a large part of her directorial debut, In The Land of Blood and Honey, focusing on the issue. There is still a startling lack of insight into the matter, and a large part of them stems from the people just not knowing about it, or not knowing enough about it.

Dressed in her usual all-black ensemble, complete with a headscarf, Angelina was seen laying flowers on a monument for the victims. She and Hague then participated in a conference in Sarajevo about the issue of sexual violence in war.

Angelina told those attending the conference, “The use of rape as a weapon of war is one of the most harrowing and savage of these crimes against civilians. This is rape so brutal, with such extreme violence, that it is even hard to talk about it.”

According to reports, Angelina and William Hague will co-host another high-profile summit on this same topic in London during the summer. It would end up being one of the largest conferences of its kind, but when you look at the numbers, its extremely sobering. Local estimates allege that almost 20,000 women were raped during the Bosnian war in the 90s, but guess what? Only 63 people have been convicted so far. That’s about 0.003%. So while these conferences no doubt help to bring light to the woman who have yet to receive justice, the numbers give devastating a whole new meaning.

Apart from the issue at hand though, I’m not really sure how Angelina’s managing all this. This is obviously an issue close to her heart, so she’s taking it very seriously. But she also has her second directorial attempt to wrap up [in the editing room], a major blockbuster to promote, and six children to raise. Plus, she also needs to find time for that last preventative surgery in the next year or so.