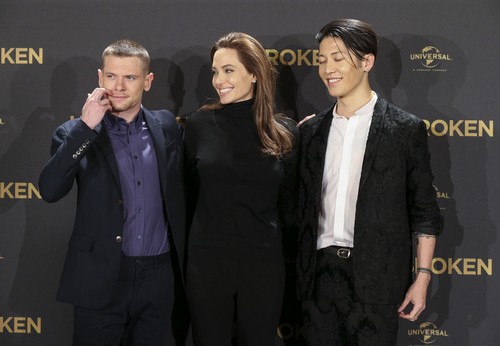 Although Angelina Jolie’s second directorial attempt, Unbroken, has already been garnering critical acclaim and Oscar buzz, sources tell Page Six that the version of the movie that’s being shown around is not Angelina Jolie’s version. That’s right – Universal finally gave a big-budget film to a female director – and one of the most famous celebrities in the world – and then ended up taking away her cutting privileges.

Page Six’s sources explained, “Universal re-edited her movie, because it was too arthouse. They took control and edited it into a more commercial movie. Her cut was intense and dark in some places. But the studio wants the movie to be a commercial success, so took control of the final cut and re-edited it. Jolie can’t have been happy about it, but she is proud of the movie and let the studio make the changes it needed to.”

The movie follows Louis Zamperini, an Olympian who ended up surviving being lost at sea, only to get captured by the Japanese and become a prisoner of war. Of COURSE it’s going to be ‘dark’ and ‘intense’. What’s the point of this kind of movie if we get a happy-fied version of everything that Louis went through? The perseverance of the human spirit, the battle against tyranny – none of that is going to come across in a ‘commercial’ version of this film.

Then again, if people are already responding to it, then maybe the studio did the right thing after all. We don’t know if the public would have responded better to Angelina Jolie’s version of it, but the sad truth is that very few filmmakers get final cut nowadays. Apart from Christoper Nolan, James Cameron, Steven Spielberg, and a handful of others, studios always, ALWAYS interfere in the final cut – even with celebrities as famous as Angelina Jolie.