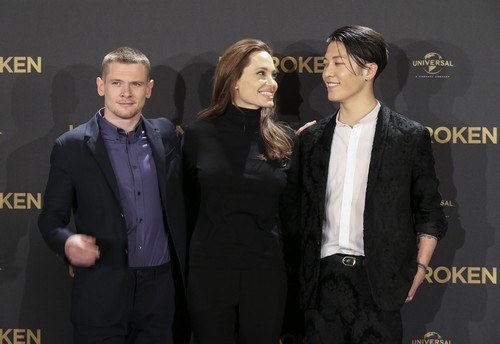 Angelina Jolie is married to Brad Pitt, but that hasn’t stopped the tabloids from spreading rumors the she and Miyavi, the Japanese pop star in Unbroken, are hooking up. We already know that Angelina and Brad have been having problems recently, thanks to the paparazzi photos of them fighting on the balcony. But if the latest report from the National Enquirer is right, then Angelina Jolie and Brad Pitt might be having more serious problems than Angelina’s smoking or silly couple’s spats. If Angelina is cheating with Miyavi then her marriage to Brad could be all over but the crying.

Granted, these are just rumors reported by the Enquirer, so we aren’t exactly calling divorce lawyers yet . Apparently, Angelina Jolie and Miyavi have been getting close and Brad Pitt is furious that Miyavi is moving to Los Angeles. Never mind that Miyavi already has a wife and children, and that Angelina would obviously have gotten close to the people that she directed. Notice how the media isn’t saying a word about Angelina Jolie getting close to Jack O’Connell, who is the star of Unbroken and almost two decades younger than her. That’s because the tabloids know there’s no story there, although I wouldn’t put it past them to start making things up there as well.

Look, we’re not saying this is impossible. After all, how did Angelina Jolie and Brad Pitt get together? Brad was having problems with Jennifer Aniston, and he got closer to Angelina while filming Mr. & Mrs. Smith – and then things happened. In the same way, it’s possible that Brad and Angelina are having problems now, and Angelina’s close relationship with Miyavi will develop into something more. However, this time TWO marriages would be homewrecked if that happened, since Miyavi also has a wife and kids.

What do you guys think? Is this all just silly conjecture, or is there something to the story? Could Angelina Jolie actually be cheating on Brad Pitt by hooking up with Miyavi? Let us know your thoughts in the comments below.

The photocall for the film ‘Unbroken’ on November 27, 2014 in Berlin, Germany by FameFlynet