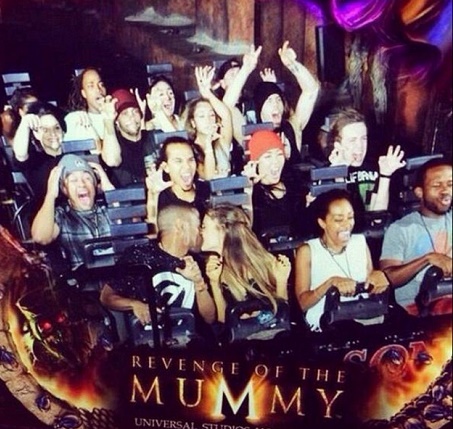 Ariana Grande and Big Sean have now confirmed their relationship after they were pictured kissing on a theme park ride. The young couple hasn’t been answering questions about the status of their relationship, but this picture makes it pretty obvious. The rumored diva and Naya Rivera’s ex rode the Revenge Of The Mummy at Universal Studios Hollywood, and they were caught mid-kiss as they rode the attraction.

The two seemed to be having a good time cuddling up to each other among the others on the ride who were scared for their lives. It seems they took in everything that was offered at Halloween Horror Nights. The event’s official Twitter account later stated, “I need a “Grande” coffee after hanging out with Ariana Grande & friends last night. Damn! Scared, running people are hard to keep up with!”

Also, there with Ariana was her fame-whore brother and Big Brother 16 house guest, Frankie Grande. Of course he went to Instagram to post photos of his famous sister and her new boyfriend. Speculation of the two possibly dating first started when they were seen holding hands backstage at the MTV Video Music Awards in Los Angeles.

The tiny popstar has previously been quiet about her blossoming romance but admitted she loved working with Big Sean.

“I think I love working with Sean the most because we’ve done so many songs together, and he’s amazing… and he’s one of my favourite people ever,” she told On Air with Ryan Seacrest.

She also said, “I mean, I guess [we’re dating]. Curiosity man, it’ll kill you. I don’t know what to say, Ryan. Why are you doing this me? I’ll tell you when we’re not on the air.”