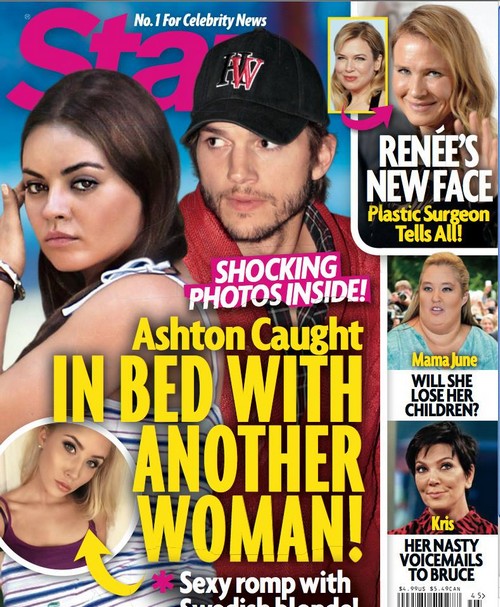 Once a cheater, always a cheater. Isn’t that always the case? When Ashton Kutcher first got together with Mila Kunis, everyone just assumed that the relationship would last two seconds. I guess they underestimated Ashton, but eventually, doesn’t a serial cheating always mess up? Everyone knows that Ashton Kutcher cheated on Demi Moore with that stripper, Sara Leal, and probably not just that one, either. And then he and Demi divorced, and he got together with Mila five minutes later. And now, according to the latest cover issue of Star Magazine, Ashton has cheated on Mila.

It’s one big happy family. Apparently, Ashton was ‘caught in bed‘ with some Swedish blonde, even though Mila Kunis literally gave birth to their daughter a few weeks ago. You know, I’m usually all for jumping on the Ashton Kutcher cheating bandwagon, but I don’t know if I believe this story. First of all, when would he have had the time? He’s been working pretty consistently the past few months, and even I don’t think that Ashton Kutcher would cheat on his pregnant bride-to-be when she’s weeks away from giving birth – or god forbid, after she gave birth. The guy may be a tool, but that’s crossing into epic douchebag territory. Also, I do think that Ashton Kutcher loves Mila Kunis way more than he ever cared for Demi Moore, which is probably another reason that he’s been keeping himself on his best behavior. Seriously, when was the last time we have heard negative Ashton Kutcher stories in the media – before this one, I mean? He hasn’t said anything asinine on Twitter, he’s been keeping a low profile, and he seems really happy about his new baby girl.

Again, I don’t know if that means he’s changed, or if the asshole behavior is just lying in wait. I guess we’ll have to wait to find out. Meanwhile, Star also has some interesting new stories about how Kris Jenner is leaving Bruce Jenner ‘nasty’ voicemails, probably for dating her friend. Also, Renee Zellweger has been spotted out and about in town, sporting the most frozen and Botoxed face that has graced Hollywood since Nicole Kidman.