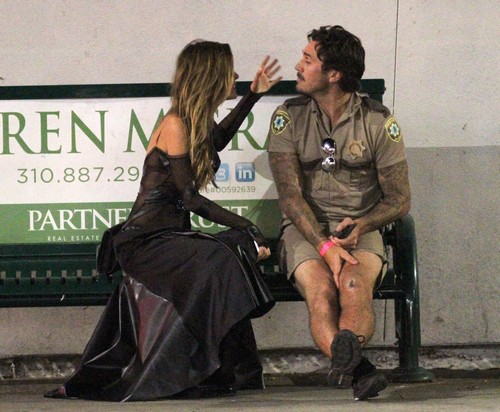 Audrina Patridge of The Hills fame has lived a pretty low-key life since she shacked up with Laguna Beach’s Lauren Conrad on the MTV reality TV show. So, no one really paid Patridge any mind on Saturday October 25th when she stepped out with on-again off-again boyfriend and DMX rider Corey Bohan for a night of Halloween fun at a high-profile party.

Audrina and Corey have been dating off and on since 2009, and although they arrived at the party as a couple, it’s safe to say the night ended with a dramatic break-up. Patridge arrived at the party dressed in a skimpy black ensemble and was sure to turn heads. If her barely-there costume didn’t turn her heads, then her blow-up drunk fight with Corey Bohan at the end of the night was sure to have.

We’re going to go out on a limb here and say alcohol was definitely a factor in Audrina and Corey’s head-turning fight. The Hills’ star arrived all smiles and looking put together, and the night ended with her appearing disheveled and sitting in the street leaning against a lamp post crying. Pictures can tell a story, and judging from the pictures taken of Audrina Patridge after the Halloween party, it must be one hell of a story.

Audrina was photographed sitting on a street bench crying and holding her head, when she wasn’t waving her arms like a mad woman at Bohan and pointing her finger in his face. Corey was clearly in no mood Audrina’s drunken antics, and he ignored the distraught reality TV star, and texted on his phone while she went completely crazy. Their feud ended with Audrina looking drunk and promptly sitting on the sidewalk in the street crying, and leaning against a lamp post, while Corey walked off and left her there!

Former ‘The Hills’ star Audrina Patridge and her on again, off again boyfriend Corey Bohan get into a huge fight after attending Matthew Morrison’s Halloween Party at Hyde Nightclub in West Hollywood, California on October 25, 2014. Audrina and Corey, who recently split up this past summer, seemed to be in great spirits before the party started but afterwards it was a whole different story! The not so happy couple argued on a bench and at one point a visibly upset Audrina sat on the sidewalk crying! FameFlynet