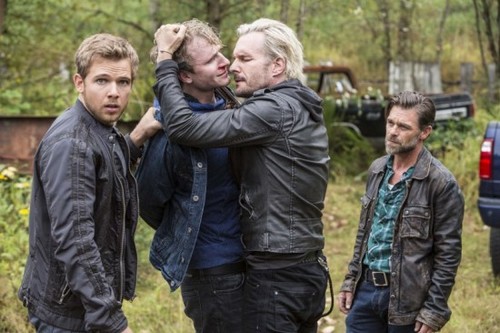 Tonight BATES HOTEL returns with a new episode called, “Shadow of a Doubt.”  On tonight’s new episode Norma distracts Norman from his obsession with Miss Watson.  Did you watch last week’s premiere episode?  If you missed it we have you covered with a recap, right here.

On last week’s premiere episode Norman fixated on Miss Watson’s death; Norma worried about the future of the motel when plans for the bypass move ahead of schedule; Bradley was driven to extremes as she searched for her father’s killer.  In good news Big Love’s Chloë Sevigny will be joining the cast this season.

On tonight’s episode Norma tries to distract Norman from his obsession with Miss Watson by joining a play. Bradley turns to Norman for help when she has to escape a dire situation. Romero is pressured to make an arrest for the murder. A new player at work has Dylan and Remo on edge.

Tonight’s Bates Motel season 2 episode 2 is going to be a great one, and you won’t want to miss. So be sure to tune in for our live coverage of Bates Motel — tonight at 9 PM EST! While you wait for our recap, hit the comments and let us know how excited you are about the new season?  Check out the sneak peek of tonight’s episode below!

RECAP: Norman is walking around the motel; he decides to go into the basement. In the basement he finds Bradley there who’s staying due to personal reasons, Norman asks Bradley why she’s staying with them and that he won’t help her unless she tells him. Norman wants to help her, but he needs to know that what she’s doing makes sense. Bradley says she killed the guy that killed her dad, Norman looks a bit surprised. Norma is at the doctors, she asks about blackouts for her son Norman. The doctor tells that it could be a mental disorder of some sort. Norma looks worried after hearing that. Dylan is driving to find Sherriff Romero; he finds out that Gil was shot in the head from Romero. Romero tells Dylan if he knows anything he should tell him because he will catch whoever murdered Gil. Norma is buying books, she notices a mother and son reading books and she looks to be a bit envious of them. Dylan is speaking to a man about Gil being dead, he tells Dylan to not worry about it and wait until the cops bring someone in and let him deal with it. Sherriff Romero drives up to the cemetery, he finds a man who’s visiting, and he tells the man that someone killed Gil. Nick tells Romero that he had nothing to do with it; he asks Romero about Blaire’s case that it has been four months now and nothing has been found out yet. After their conversation Nick walks away. Norman is eating carrots at the dining table with his mom watching him; she asks if Norman wants to do a musical since the community is doing a musical. Norma really wants to do the musical with Norman; she talks about how they used to sing a lot when he was younger. The phone begins to ring, Norma goes to answer the call and it turns out that the call is for Norman. Bradley’s mom is on the phone, she asks Norman where she is and he tells her that he hasn’t seen her or talked to her in a while. Norma asks Norman about what happened, turns out that Bradley has gone missing. Norman goes back to eating; his brother Dylan is feeling suspicious about him. Dylan goes to talk to Norman in his room; he wants to know if Norman knows where Bradley is. Norman denies knowing anything, Dylan is about to leave and Norman tells him that she might be already dead.

Norman is at the grocery store standing around at looking at one of the shelves, at the cash register he notices a flier with Bradley’s face on it saying missing. The woman at the cash register asks Norman if he lives around here, he says he does and has come to the grocery store once in a while. She notices the dye in his basket and asks about it, he makes a great save and says it’s for his mom. It cuts to Dylan who’s talking to Remo, they see Zayne from outside. Remo doesn’t look happy. It cuts to Sheriff Romero and a fellow cop appears saying they’ve got a lead. The cops go and crash some guy’s apartment; the man runs with drugs on him to the toilet, he flushes the drugs down the toilet and then jumps off the apartment balcony to escape. Too late though he got caught by Romero.  Norman is going through his room, he finds a stash of money and looks at it to see If there’s enough there for Bradley. Norma is calling for Norman and looking around for him, she ends up going into the basement to look for him; Bradley quickly hides to not be found. Norman appears and catches his mom before she could find Bradley; Norma has downloaded sheet music for them to sing for the audition of the musical. They go upstairs; Norma begins to play a song on the piano. She asks if knows the song, he says he doesn’t; though that’s not the truth she begins to play again and Norman begins to sing Mr. Sandman. Norman then says he’ll make an ass of himself for her.

Sheriff Romero is telling the man they found at the apartment that he was the last person to have sex with her, they found out due to a semen sample. The man is named Kyle; he says that he’s also had a feeling that he also killed his old girlfriend Carly. Kyle tells Romero that she slept with a lot of guys because she had daddy issues or something; he then asks if he can go. Romero says he’s not going anywhere. Norman is helping Bradley with dying her hair, he gives her sunglasses also and a ticket. She asks if he can drive to help her get out of town, he says he can and that he will borrow his mom’s car. Bradley thanks Norman for everything he’s done for her, she says that she knew that there was always something different about him and now she knows she wasn’t wrong. Norman says he’ll back for her at eight and goes back up stairs. Dylan asks Remo who Zayne is, Remo tells him he’s a Scarface poser and that he was in prison for getting caught with a car full of weed speeding. Speak of the devil, Zayne drives up. Zayne asks for help to get something out of his trunk, both Dylan and Remo walk up to the car. In the trunk is a man named Jonny B., he asks them to get him out of the trunk. They take off the tape on his mouth; Zayne says that he knows that he and his people killed Gil. Zayne wants him to send a message to his boss for him, the best message he can give is shooting Jonny B. Remo tells them to drop him off at Nick’s house and then gets in his car and drives away. Norma is making a bed she finds a cut out of a newspaper and a pearl necklace; she takes them both and hides them back underneath the mattress of the bed.

Norma and Norman are at the auditions, there are a lot of people. They meet with Christine the women who are behind it all, they’re shown where to sign up and wait for the audition. Bradley is packing her things getting ready to leave; it looks like the line of people waiting for the audition is long. Norman keeps checking his watch making sure he’s not late to drive Bradley. Norman tells his mother that he has to be somewhere at eight. Norma tells him to cancel; he says he doesn’t want to. Norman ends up walking out of the audition; she gets pissed off at him. Norman tells her that he doesn’t want to do the audition, she wanted to just do something fun together. Norman then says that they’re always together; they work together and eat together. Norma then asks Norman if she told him everything about Blaire being killed, because of the pearls she found. Norman tells her that he found the pearls in his pocket after; Norma begins to cry and say she’s scared. Norman goes and hugs his mother trying to comfort her, he tells her to stop it because she’s being silly. Norman tells her it’s nothing and that she’s getting all worked up over an idea of nothing. Norman tells her that they’ll do the audition together, that he’ll cancel on what he’s doing at 8. Norma goes back into the place; Norman calls Dylan and tells him he lied to him. He tells Dylan that Bradley is hiding in the basement; he then lets him know she needs to be driven to the bus stop to re start her life. He tells him why she’s there and asks him to drive her instead, Norman looks upset that he couldn’t do it himself. Dylan goes to the basement and finds Bradley there, he tells her they need to go and that he’s taking her. Norman gets back to the theatre, they’re name is called. Norma says that she’s not sure if she can do it now, he tells her they’re just pretending and that they she can do that. Norma says she doesn’t have sheet music; she then begins to sing “Maybe This Time” by Cabaret. The entire theater applause for her after she’s done auditioning.

Romero is at his office late at night thinking and looking stressed, he goes to see Kyle again and tells him that the worst part about his job is when he can’t solve a crime; he then drops the bomb, that he will charge him of the murder of Blaire. Dylan is eating at a restaurant with Bradley a bus will arrive soon, he tells her about how it kills Norman to not be the one doing this for her. Dylan needs her to write a suicide note because of Zayne looking for the killer of Gil. Bradley begins writing her fake suicide note, Norman arrives back at the motel with his mother. Emma arrives and tells them that they’ve arrested someone for the murder of Ms. Watson. Norma looks very pleased about the news, because it makes her suspicions of Norman being the killer nothing after all. Emma tells Norman that he’s got a great mom who cares. The bus arrives for Bradley to leave, she gets up from her seat and leaves the restaurant. She gets on the bus and it drives away. Norman is sitting outside waiting for Dylan, he arrives at the motel. Dylan walks up and tells Norman that she’s on the bus. Norman thanks Dylan for what he’s done, he then gives Norman a letter from Bradley to him. Norman looks happy after reading it. IT cuts to a gas station, a man walks in and it turns out to be Norma’s brother.