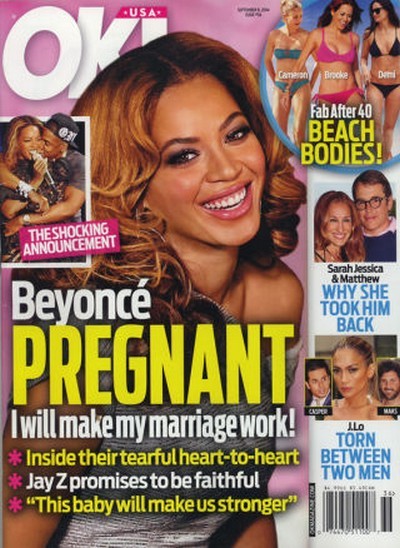 Just a week ago, we were receiving daily updates on the progress of Beyonce‘s divorce from Jay-Z. But with a sudden about-turn, an allegedly pregnant Beyonce took to the stage at the VMA Awards and trotted out Jay-Z and Blue Ivy. If that wasn’t enough, she even made Jay-Z kiss her in front of all the cameras. Yes, Jay-Z looked uncomfortable and not into the kiss, but it achieved Beyonce’s goal – even though nobody bought the publicity stunt, it’s gotten people away from talking about divorce and talking about Beyonce possibly reuniting with Jay-Z.

Sure, the reunion would come at the expense of Solange, but it’s a choice that Beyonce’s already made. She ignored her own sister at one of the biggest events of the year, and for what? So that Jay-Z would come and kiss her on stage, thereby letting everyone that they’re still together. Wouldn’t it have been easier to just release a divorce statement via People Magazine? Maybe they thought that people wouldn’t believe them, but I have a newsflash for Team B: nobody believes you, even now. Besides, any reunion between Beyonce and Jay-Z is bound to be tentative, unless… Beyonce gets pregnant!

See folks, if you’re a billionaire celebrity who’s trying to stop your husband from leaving you, what do you do? Get pregnant! According to OK! Magazine, Beyonce is ‘pregnant’ with her second baby, although we still don’t believe that she was actually pregnant last time. In this scenario, the ‘pregnancy’ has reportedly allowed both Beyonce and Jay-Z to get closer, despite all their other problems. Will it actually salvage what’s left of their marriage? Only time will tell, but we can say one thing for sure: Beyonce really, really, really doesn’t people to think that she’s getting dumped.