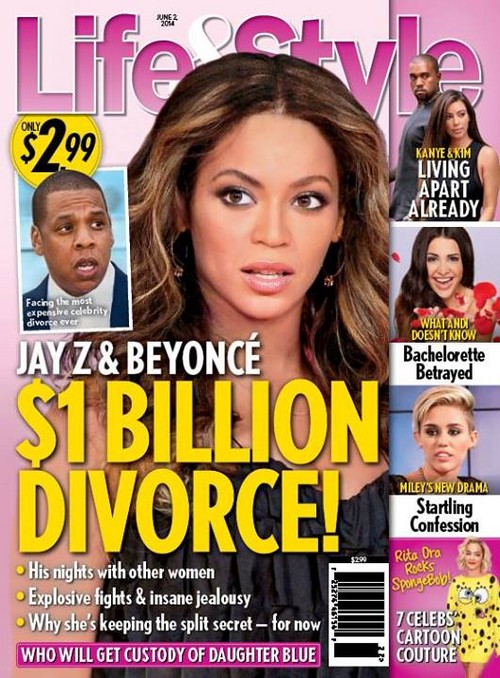 It seems like that now-infamous surveillance tape of Solange laying into Jay-Z is just the tip of the iceberg when it comes to the problems in the rappers marriage. We have already told you that his alleged cheating is what caused the explosive fight on the night of the Met Gala and now we are hearing that it is just one of many blow outs that has plagued his marriage to Beyonce.

According to the June 2nd print edition of Life & Style Magazine Beyonce has had enough of Jay-Z’s string of side chicks and is absolutely ready to take steps towards divorce. As of now things need to stay hush hush because the couple is about to set out on their joint summer tour and the money already invested is insane. There is no way that Bey can pull the plug on that business deal but that doesn’t mean for one minute that she’s not getting her ducks in a row behind the scenes.

Kim Kardashian and Kanye West’s lavish wedding is just days away but the couple is already used to living apart. Remember back when Kimmie was pregnant and her man opted to spend the majority of his time in France? Well that pattern set the tone for their relationship and the question remains- what exactly are these two going to do when they have nothing big to plan and are just newlyweds? Life & Style has the latest details on their bizarre relationship.

Is the new Bachelorette already being set-up by ABC for heartbreak? Grab the latest issue of Life & Style to find out more but in the meantime, do you think that there’s a snowball’s chance in hell that Andi Dorfman can find love on reality television? Tell us your thoughts in the comments below!