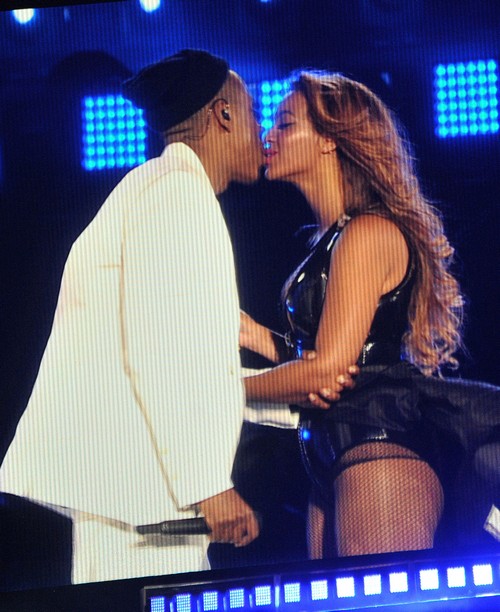 Will the PR shenanigans ever stop? Beyonce and Jay-Z are going overboard in manipulating the public to forget that they were about to divorce just two months ago. We’ve never seen the Beygency work this hard to garner some positive publicity, and it’s obvious what they’re doing. In addition to frequent public appearances and social media involvement, ‘pregnant’ Beyonce recently made a surprise appearance at Jay-Z’s concert at the Global Citizen Festival. Not only that, but Beyonce also had a wardrobe ‘malfunction’ while performing at the festival, which I’m sureeee was just an accident.

I mean, she was wearing a nude bra so she was clearly prepared for such an ‘accident’. It got people talking about her, but without becoming a major controversy. See, don’t let anybody say that Beyonce and Jay-Z don’t know how to play the public. For whatever reason, Beyonce and Jay-Z have decided to cancel their divorce, and not only that, but now they’re pushing Beyonce’s second pregnancy as though it’s the second coming of Christ.

Now, is Beyonce actually pregnant? I highly doubt it. But that’s not stopping Beyonce and Jay-Z from pretending as though she is pregnant, not to mention trotting out Blue Ivy to get the media talking about how close-knit their family is. They’ll do anything to get the public to forget that Jay-Z cheated on her, and that Beyonce decided to forgive him and forget about her original [and correct] desire to divorce him.

At this point, they’ve already managed to convince half their detractors that their marriage is perfect again, that Beyonce is pregnant with their second child, and that all that divorce talk was just a load of crap. But we know the truth, and as much as Beyonce and Jay-Z will continue using their endless PR machine to brainwash the public, there’s too much proof out there that says otherwise.