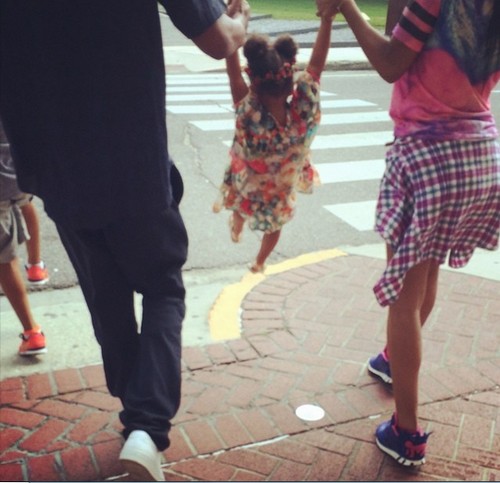 Beyonce is trying very, very hard to make people forget that she and Jay-Z are on the verge of getting a divorce. Despite many legitimate outlets and sources claiming that Beyonce and Jay-Z will be getting divorced after their On The Run tour, Beyonce is clearly trying hard to do damage control. Perhaps she doesn’t want people to break the divorce news before she does, or maybe she’s just sick of all the speculation.

We already know that Beyonce needs to have total control of her public image, so it makes sense that she’s upset over all the media reports. This is the same woman who banned fans from taking unflattering pictures of her during concerts – can you imagine how she’s reacting to all of the humiliating reports about Jay-Z cheating on her?

Beyonce’s not the type of person to let the media have the last word, even if her private life is in tatters. As such, she and Jay-Z have been making plenty of public appearances recently, trying to portray the image of a happy family. They’ve even been using Blue Ivy during these appearances, probably realizing that desperate times call for desperate measures.

Honestly, I don’t think their tactics are working anymore. This whole situation has snowballed outside of even Beyonce’s control, which is saying a lot. Once the floodgates opened, the stories came rushing out, and it seems like everyone who kept quiet in the past have now decided to open up. Jay-Z and Beyonce have an open marriage? Check. Jay-Z has affairs with many of his proteges? Check. Beyonce was humiliated by Jay-Z’s affairs? Check. Jay-Z was trying to flirt with Rachel Roy at the MET Gala. Check. See, the list goes on and on, and Beyonce, Jay-Z, and Blue Ivy getting papped looking like a happy family isn’t going to make a lick of difference anymore.