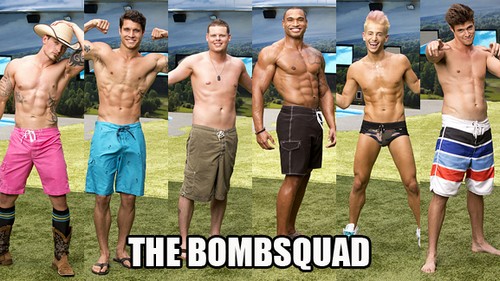 On Big Brother 16, the Bomb Squad alliance that was entered into during the first moments of the show has pretty much been on shaky ground. From the constantly shifting focus to the side alliances that are not yet solidified, there are plenty of areas where the Bomb Squad could blow up. Perhaps the biggest of these is the addition of Amber Borzotra by Devin Shepherd during the still of the night. But it gets better…

Caleb Reynolds then confesses his love to Amber…only to be roundly flatlined in return.

Caleb is hurt, but seems to be determined.

Amber goes silent and avoids him for a time.

Amber then goes on to win Co-Head of Household honors alongside fellow Bomb Squad member Devin.

This development has the potential to truly dismantle the Bomb Squad and it is exactly why it was silly for Devin to do it in the first place. Not only does it put Amber in a position of revelation to the rest of the house guests, it also puts the alliance at risk for being revealed because of the obvious potential for backstabbing.

Are Amber’s days in the alliance numbered? Of course they are.

There are some vital points to be made here. For example, Caleb is not over his infatuation with Amber. He will be resistant to ultimately getting her out. In fact, if Amber is smart she would use her power as potential Head of Household to gather new troops for a new alliance. She was always going to be on the bottom of the Bomb Squad and I am reasonably sure she knows it.

Caleb would be an easy person to pull off the edges of the Bomb Squad. A few fluttering eyelashes and the right bathing suit would have him chasing her wherever she pleases. One would expect any number of floaters with no real alliances would climb aboard as well if it were presented correctly.

They could even name the group Bomb Squad 2.0 to take care of Caleb’s ego. Why not bring in Donnie? They would all be a great under the radar core for a solid alliance.

Much of this depends on how the Head of Household Battle of the Block turns out. If Amber can somehow pull out a win, she will be in a position of power. If not, it might be time to sit back in her comfort zone and allow others to call the shots.

One thing is for certain, however…Big Brother’s Bomb Squad is destined to fail. They are too big and have far too many working parts to work well together for very long.

What would you do if you were Amber? Would you try to go rogue so early?