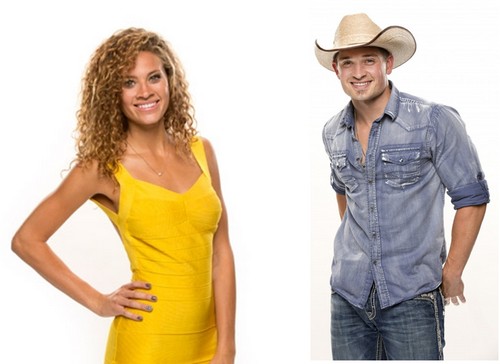 Big Brother 16 executives are determined to keep this season void of last season’s repulsive racist and homophobic slurs made former offensive and repulsive houseguests. But, Caleb Reynolds may just be that houseguest that turns the Big Brother 16 house upside down. Not only has Caleb made some very repulsive slurs himself a few years ago before casting him into the house when he referred to President Obama as a Muslim monkey but he had himself videotaped beating a hog to death with a stick.

A self described metrosexual cowboy, Caleb has already stalked fellow houseguest Amber Amber Borzotra and when she wouldn’t return his attention, he began trash talking her. Clearly the guy is not normal, Amber never for any reason gave him the impression that she was interested and he told other houseguests that he was looking forward to her meeting his parents and moving to LA to be closer to her. Caleb claims that their is a higher power calling him to Amber, he said that “God has brought me into the house to be with Amber”, is he kidding? He has also said that he is attracted to her reading her bible – creepy! This a one sided showmance that makes Caleb look completely insane and obsessed.

What I don’t understand here is why Big Brother would cast him if his comment about Obama was public. CBS CEO Les Moones personally approves every cast member, it begs the question, does CBS hope Caleb’s dirty little past will generate ratings?

One thing is clear, Big Brother doesn’t want us to know how crazy Caleb has been acting as he has been trashing and bad mouthing Amber in the live feeds ever since the bell when off in his head that she is NOT going to return his feelings and CBS hasn’t shown any of it.

What do you think, Caleb has been doing some pretty shitty things this season, don’t you think we deserve to see all of it?